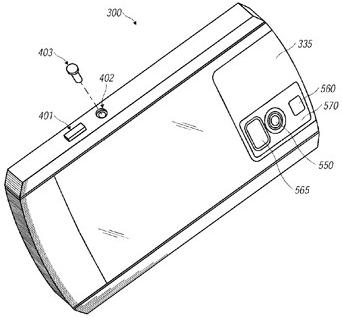 RIM has patented a system that can disable the camera portion in a BlackBerry handheld – the reason is to protect corporate information from being leaked.
On the patent filing it states: “The device as recited in claim 2, wherein said selective enablement device further comprises a disabled mode in which said photo-initiating actuator is deactivated thereby preventing an operator from taking photographs.”

As the picture (#403) shows it’s a basic key that would activate/deactivate this feature. Most likely it is easy to break in with a BIC pen. Let’s see how advance it gets by the time it hits the mass market.

Here is the full statement: “A handheld communication device capable of transmitting and receiving at least voice and text communication. The device has a body assembly including a front face arranged to be directed toward an operator of the device when held in a text communicating orientation. A display screen and a text-input keyboard are included and are each exposed at the front face of the body assembly. The keyboard has a plurality of keys that include a set of alphabetic keys with which either QWERTY-, QWERTZ- AZERTY- or Dvorak-arranged alphabetic characters are associated. An integrated camera assembly is also included that is configured for taking photographs and the communication device enabled to wirelessly communicate photographs taken with the camera assembly to a remote receiver. The camera assembly includes a photo-initiating actuator having an actuated position and an unactuated position and at least one of a selective enablement device or a selective disablement device.