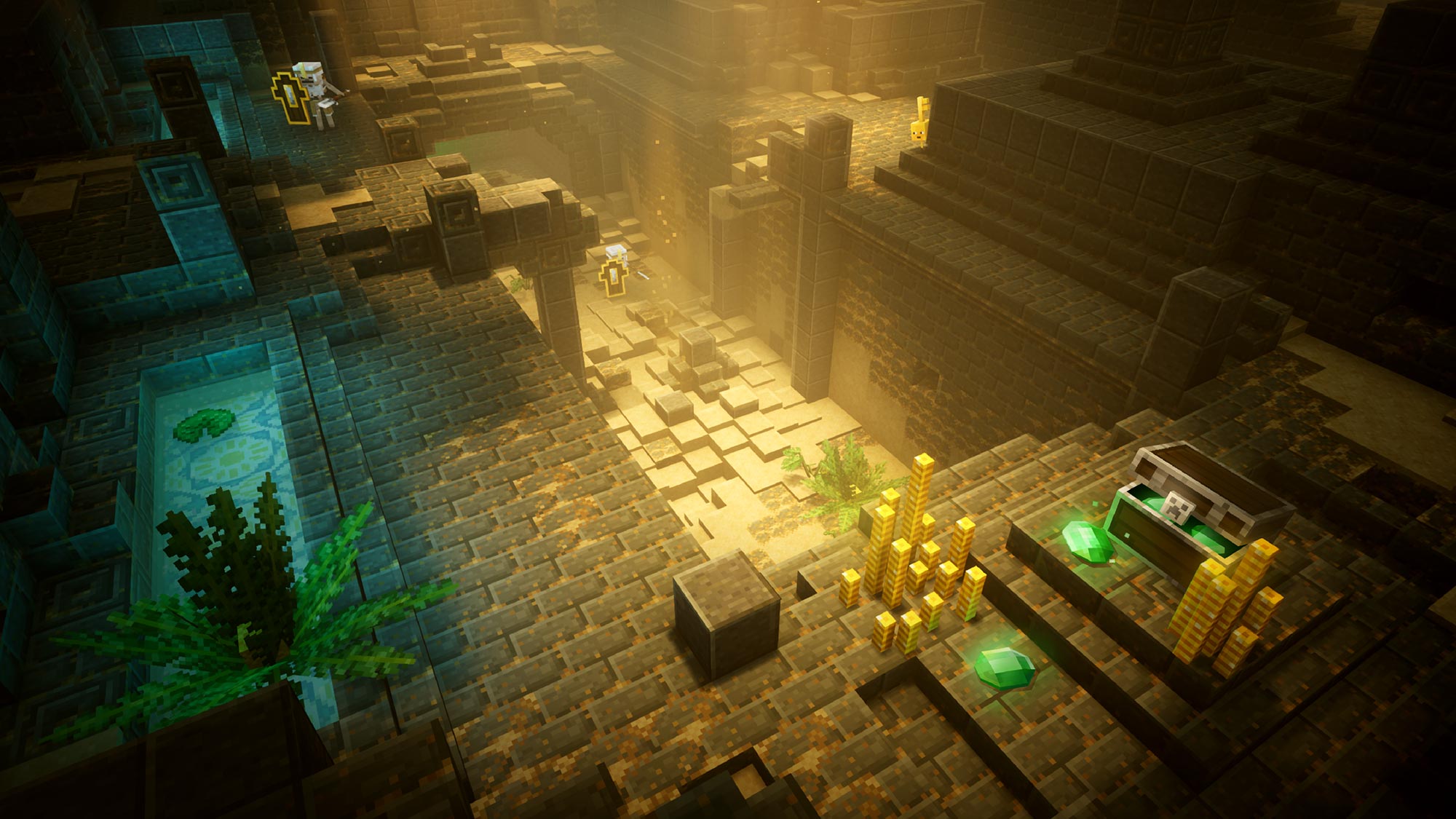 If you watched the reveal trailer for Minecraft Dungeons last year and thought the game looked like “Diablo for kids,” that assumption is entirely accurate.

The co-operative dungeon crawler takes the top-down hack-and-slash gameplay of the Diablo series and brings it to the much more child-friendly Minecraft universe. In a sense, it’s surprising it took Microsoft this long to do something entirely different with Mojang’s blocky Minecraft franchise after purchasing the developer several years ago, though it did release Minecraft Story Mode and real-world augmented reality mobile game Minecraft Earth. 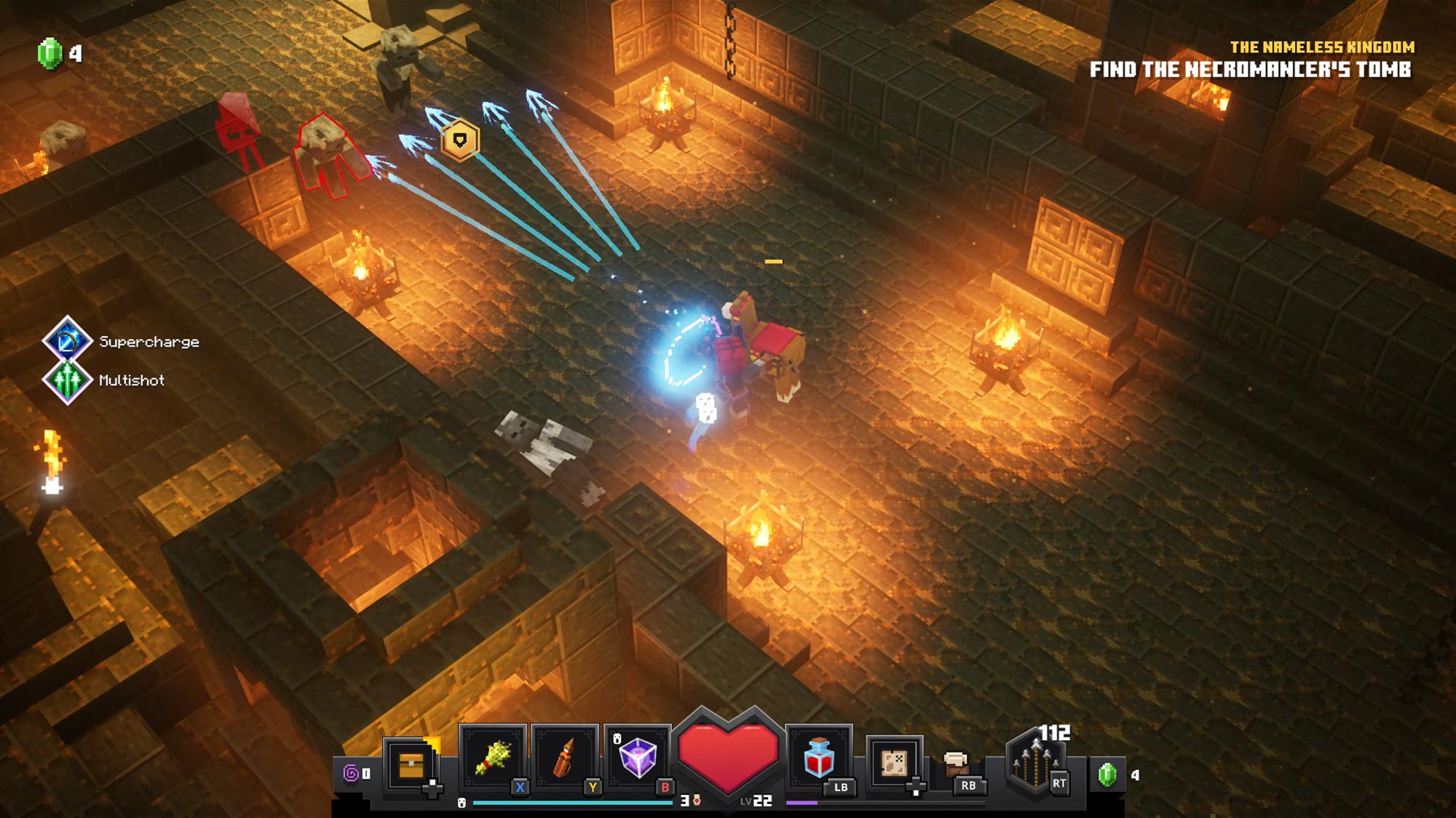 Visually, Minecraft Dungeons looks precisely how you’d expect it to. It features blocky, pixelated graphics faithful to the series’ now-iconic look, but still manages to look gorgeous running in 4K on the Xbox One X. In a sense, Minecraft Dungeons is designed to offer a ‘my-first-dungeon crawler’ experience. Onslaughts of enemies familiar to the Minecraft franchise, including Creepers, Slimes, Zombies and more, attack the player as they try to accomplish simple objectives that usually involve locating specific loot or flipping a switch.

While the button-mashing gameplay gets repetitive after a few hours, Dungeons is way more fun when you’re playing cooperatively with friends, especially since the game features local co-op. What’s great about Minecraft Dungeons is how accessible it is, making it easy for someone who doesn’t often play video games to pick it up and have a good time. 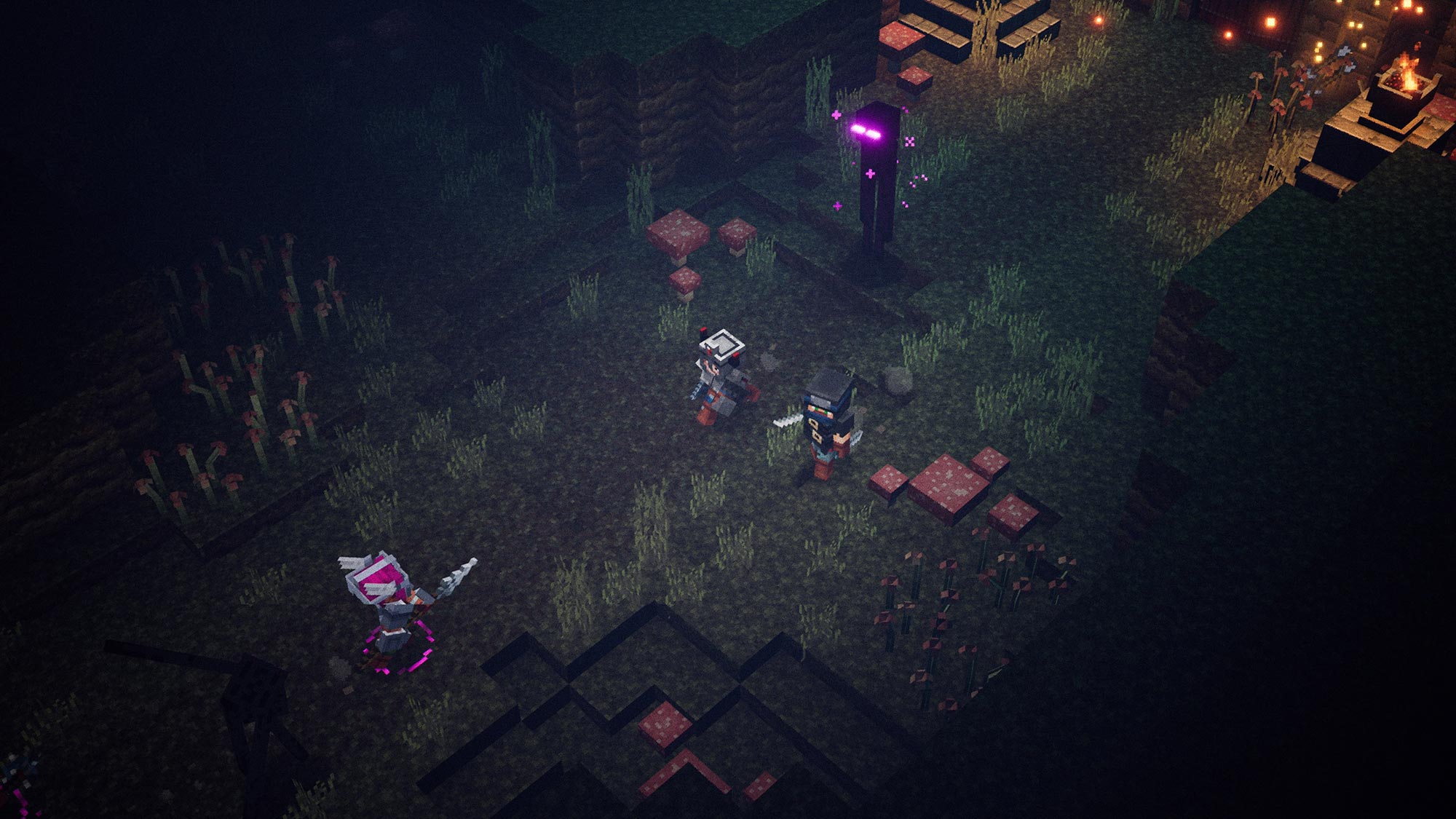 For example, I spent most of my time with Minecraft Dungeons with my partner who rarely plays games. While we played a few hours of Diablo III together many years ago, she found Minecraft Dungeons‘ simplicity far easier to grasp.

There are also a few welcome quality of life changes to the typical top-down dungeon crawler formula, including the fact that if you kill an enemy and it drops an item, only you can pick it up. Similarly, if you open a chest, those items are yours, but your co-op partner can also open that chest and get the same items. Health potions are also totally unlimited and recharge after a few seconds. All of these simple improvements should make the game less frustrating for younger players. 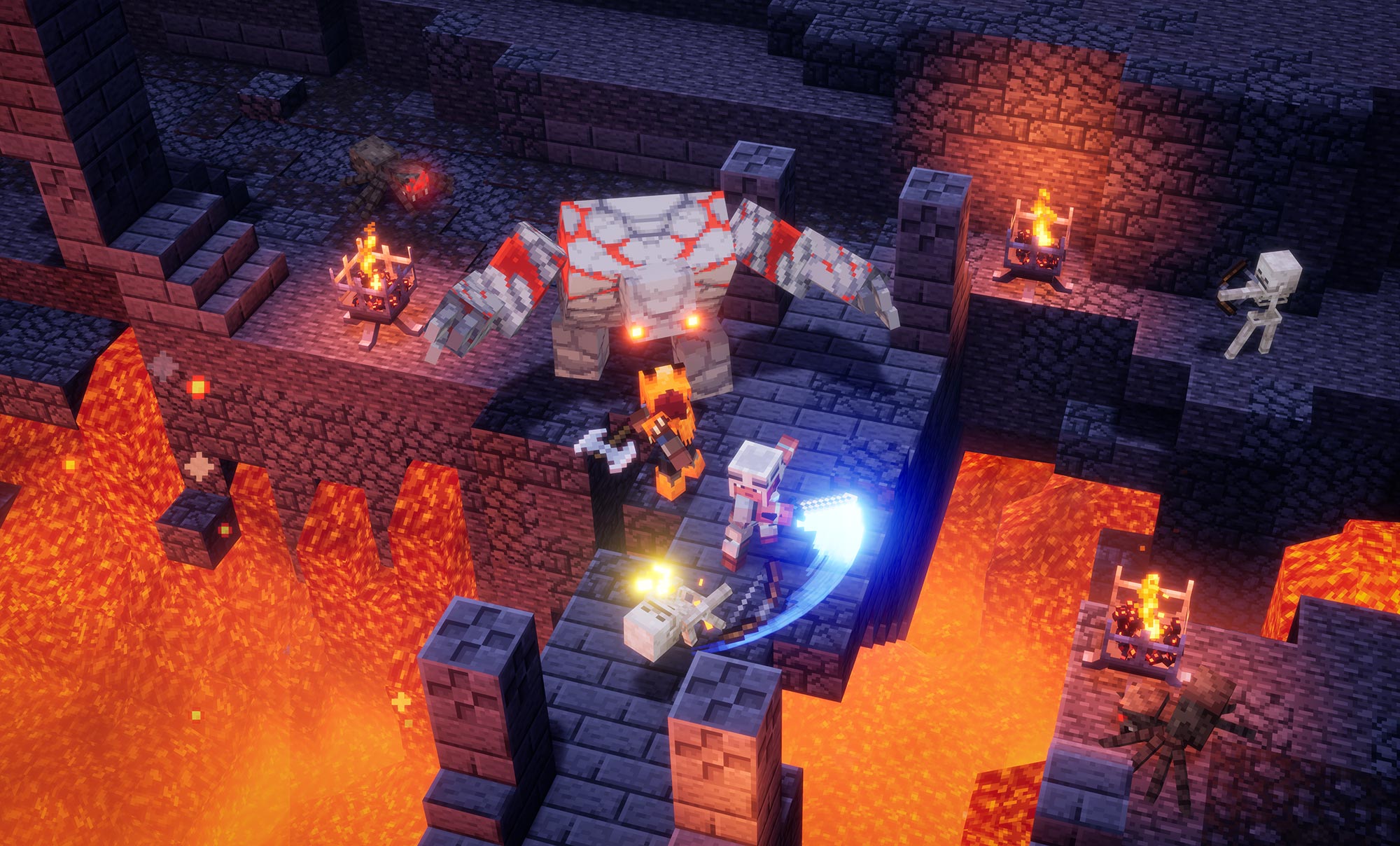 While you can equip armour, weapons and abilities just like with most dungeon crawlers, a lot of Minecraft Dungeons’ appeal comes from its simplicity. The game’s inventory system isn’t overwhelming, enchanting weapons is straightforward and even the title’s level design and easy-to-understand waypoint system, all combine to make the experience as accessible as possible.

This means it’s likely that those who have more fun parsing through weapon and armour stats than actually playing a hack-and-slash title will likely take issue with how straightforward Minecraft Dungeons is. That’s not to say there isn’t some level of depth to the game, though. Minecraft Dungeon’s character class system is based on what armour you have equipped, making it easy to jump between classes on the fly. You can also upgrade items with different enchantments like, for example, the ability to deflect enemy projectiles 20 percent of the time.

That said, I found that as soon as I enhanced a weapon, I’d just encounter one that was more powerful and end up dismantling it. Thankfully, you get those points back and can use them towards a new weapon. This means you don’t have to worry about dumping all of your points into a weapon you might ditch in a few minutes.

Minecraft Dungeons isn’t perfect, however. For example, battles can get pretty repetitive, especially if you tend to opt for projectile weapons since they basically aim themselves. Further, while I do appreciate the streamlined layout of levels, the lack of exploration seems strange, given that this is both a dungeon crawler and a Minecraft game. I would have liked to see more branching paths leading to at least some level of exploration in the game.

Many of the title’s abilities aren’t very useful or only make sense in certain situations. For example, the ability to shoot an exploding arrow is excellent, but given that enemies are usually spread out, I didn’t find many situations where I wanted to use this type of attack. I usually just ended up damaging my co-op partner. The fishing rod that pulls enemies towards you also wasn’t very useful. On the other hand, the Flaming Quiver’s fire arrows and the Wind Horn — an item that knocks enemies back — are great. 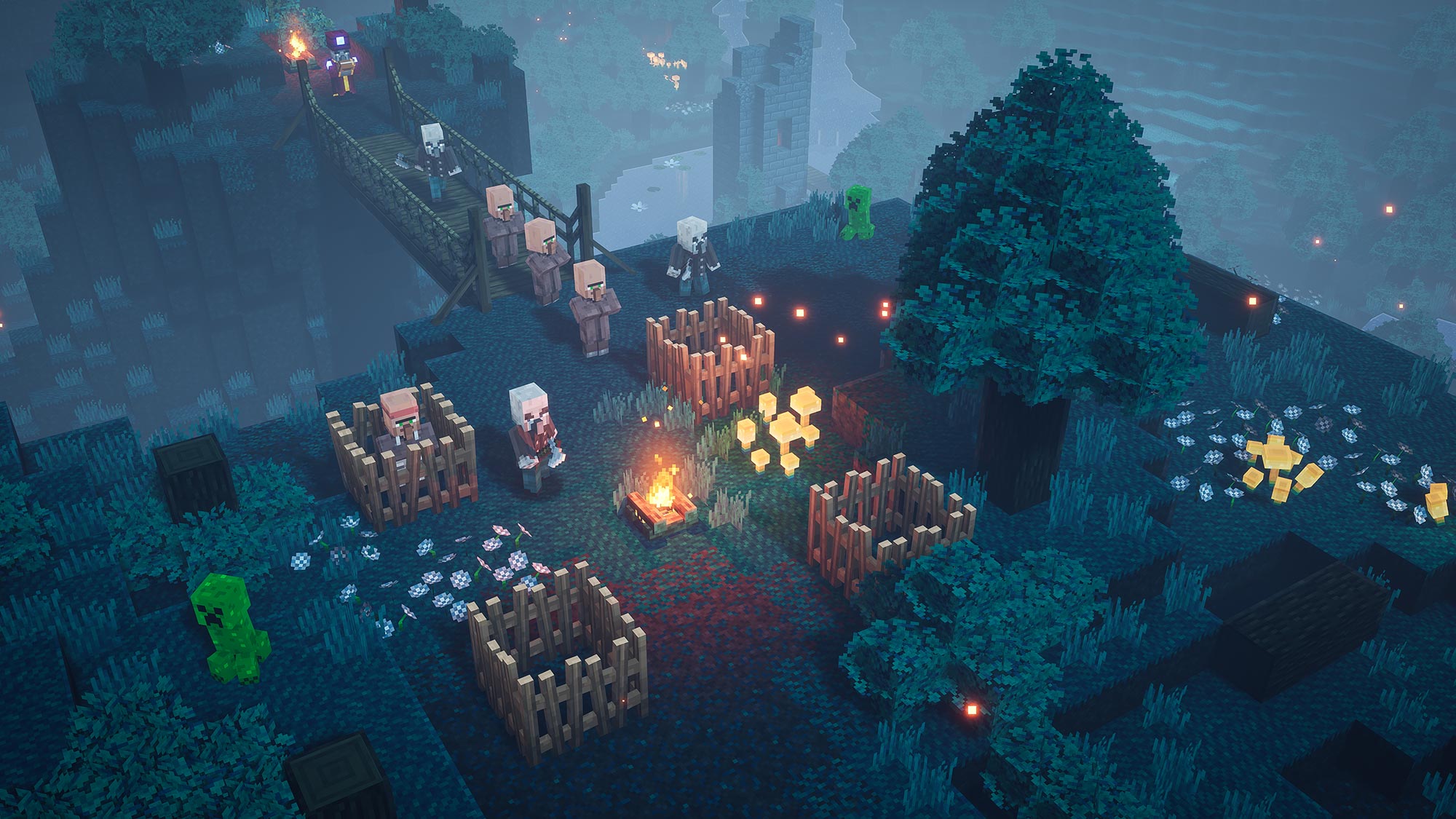 In general, I found myself mostly sticking to just shooting arrows and slashing away at enemies with my sword and skipping using abilities altogether.

If you’re looking for a laid back, relatively easy dungeon crawler to play with your kids or enjoy hack-and-slash games yourself and aren’t turned off by a game perhaps being a little too straightforward, Minecraft Dungeons is definitely worth checking out.

Despite being an Xbox Game Studios first-party title, Minecraft Dungeons is coming to Xbox One, PC, PlayStation 4 and Nintendo Switch. The game is also part of Microsoft’s Game Pass service.