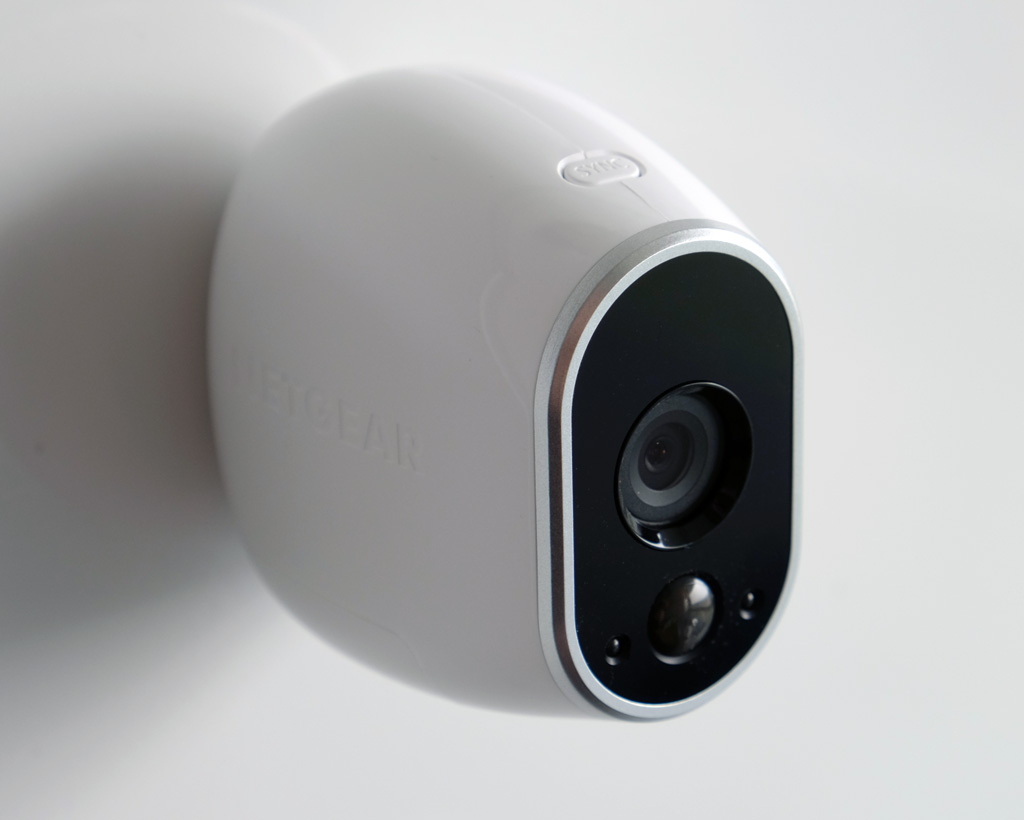 Home security seems to have reached something of a nexus point, where security cameras are not only more affordable, but increasingly capable. Mobile devices and the Internet are the biggest reasons why, as the Internet of Things (IoT) continues to take shape.

The Arlo is Netgear’s foray into the home security market in the hopes of carving out a piece of this growing pie. By going wireless and waterproof, the company is a first in this particular category, opening up some interesting flexibility in deployment.

At $250 for a single camera or $380 for a two-camera bundle, it doesn’t come cheap, so is there enough here to warrant the price tag? Let’s find out. 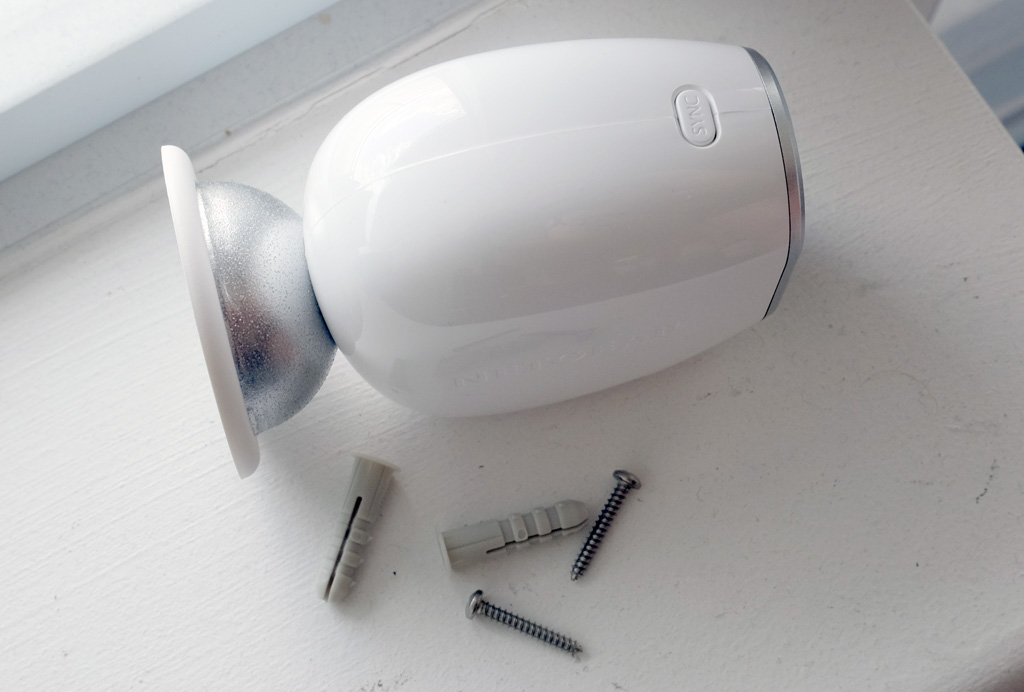 The Arlo comes with two cameras in the box, both of which are identical designs, about the size of a palm. Under the lens is a motion sensor, with an on and off button below. There’s a sync button at the top of the body and a battery compartment at the bottom that takes four lithium 123 batteries (eight are included in the box to cover both cameras).

The back of each camera has a magnetic semi-circle indent with a frame around it designed to work with the magnetic mounts that can be screwed into a wall. The magnets on both are strong enough to stay in place without the camera dropping. One of the first things I did was find a metal surface I could just plant it on. It was perfectly stable, but naturally, the mounts offer better angling, which makes them key to where the cameras can be situated.

This does require something invasive that many other cloud-based security cams don’t, namely screwing or drilling into the wall to position the mounts. There isn’t enough metal exposed on the back of these mounts to plant them magnetically to avoid using the screws. Putting them on drywall requires using the plastic anchors that come in the package.

Being waterproof also means one or both cameras can be set up outside, except it’s not made clear what effect the elements might have on battery life. Cold winters and humid summers are usually tough on batteries of all types, but Netgear says its wares are capable of withstanding temperatures as low as –10 up to 50-degrees Celsius.

The base station hub that communicates with all the connected cameras has an upright design that can be placed anywhere close enough to plug into the home router. There’s an Ethernet port, two USB 2.0 ports and power adapter socket.

The free Arlo app (iOS and Android) manages the rest of the process, where syncing the cameras with the hub was easy. Pressing the sync button on the hub and then the cameras in sequence was enough to see them pop up on the app to get things up and running. The quick start guide lays out all the steps, making it seamless to follow. 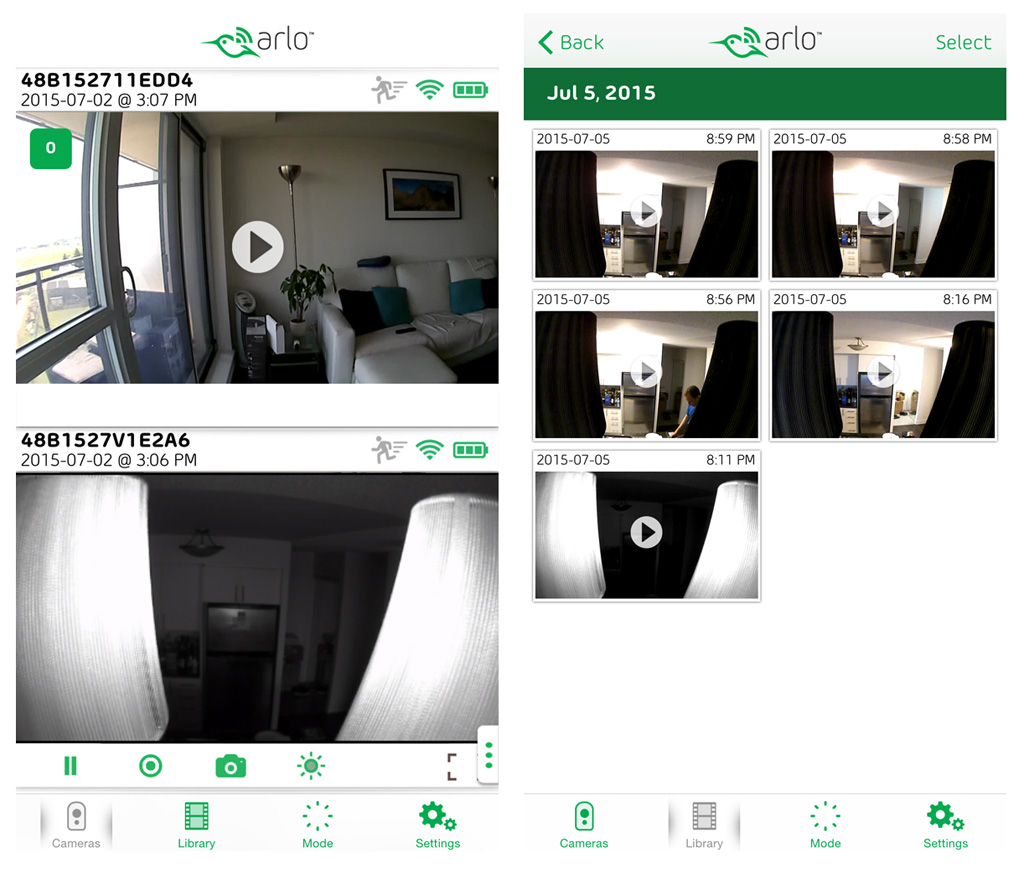 Arlo cameras record in 720p and have a 130-degree view — pretty much on par with the likes of Dropcam and Belkin Netcam HD+, but less than the 1080p the NestCam, Canary and Piper NV can manage. As there are no microphones on the cameras, they aren’t able to record audio, and without a built-in speaker, there’s no way to speak through the cameras, either.

The app offers a variety of options for customization, albeit with restrictions that can sometimes complicate things. The two default modes are “all motion on” and “all motion off,” and adding more was easy, except I soon realized that they are manually triggered unless I set a schedule.

Setting “rules” for the modes isn’t so much when the cameras record, but rather how they do it. I could adjust the camera’s sensitivity to detecting motion, and then have it record from 10-120 seconds of footage from that point. If I wanted to, I could have the second camera record video based on the motion the first one detected. For example, I placed one camera in a spot that could see the front entrance to my place, but not much in the periphery around it. The second camera could see the entire space, and so, I set up a new rule to have the two cameras play their respective roles, which I could turn on manually whenever I left my place or went to bed.

The manual input is effectively the only way to put the cameras to work. There is no geo-location baked into the hub to recognize when the user has left home with their smartphone, thereby automatically setting the cameras to recognize all motion until they return. The only workaround I was able to find was to set a new mode with a schedule, where I could have it track all motion within a particular block of the day. For those away from home for work during the week, it’s easy to set it up for the same time from Monday to Friday.

The caveat to any security cam with a motion sensor is the presence of pets. The Arlo is no different in capturing the movements of dogs or cats moseying within its view, which could lead to a number of false alarms.

Night vision can see up to 25 ft. away, though I noticed that anything sitting too close to the lens glares back, darkening the space it’s supposed to focus on further away. In this scenario, the Arlo sensed I had moved into its view, but it was difficult to identify who I was. This is why I chose to set the second camera to record, since it was facing a much wider area and would have been able to clearly see who had entered.

In any case, the Arlo sent notifications to both my phone and the email address I used to set up an account every time it detected motion (which was me testing it). I could choose to include friends or family members to get the same notifications, if I wanted to. There is also a Web app that can access the live feed or recordings as well.

Even with cloud storage, I did have the option to download a clip in MP4 format directly to my phone, and could even share it with others via social media, assuming it was worth doing so. 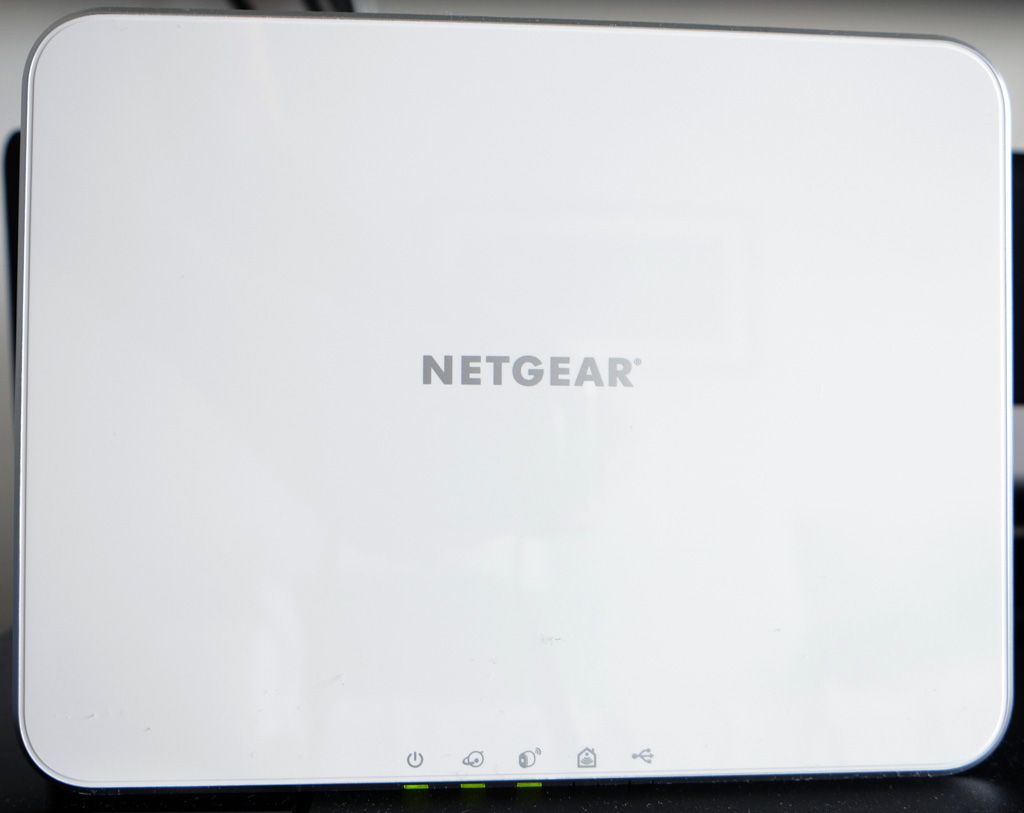 Netgear’s Arlo is intriguing, if only because it offers more flexibility in deployment than its competitors. I had a much easier time placing either camera in nooks and crannies that were nowhere near a power outlet or flat surface. That’s a huge selling point if one is looking for discretion, and without question, such a device could be used for nefarious or insidious purposes.

The lack of audio is disappointing for a security camera at this stage in the game. The batteries are said to last from four-to-six months, but that can only be ascertained through usage, so it may be even less than that if exposed outdoors. My review unit held up well with no signs of battery loss, but I also only had it for a month. I’ve seen a two-pack of Lithium 123s sell for $8.99 in retail, so hopefully they don’t have to be replaced often.

The subscription options, notwithstanding, the Basic plan seems perfectly fine for instances where the only interest is in recording movement, rather than constantly capturing footage.

That may be cold comfort when the Arlo costs between $250 and $380, but it may be a price worth paying if having wireless and waterproof cameras are necessary for home surveillance.