Customer service continues to be a topic of discussion amongst consumers and wireless carriers. Last month, the Commissioner for Complaints for Telecommunications Services (CCTS) released its first mid-year report that showed the number of overall issues slightly declined, but much work needs to be done to lower frustration among Canadian telco customers.

Following a similar path is J.D. Power‘s annual breakdown of customer satisfaction. The Canadian Wireless Customer Care Study revealed that now is “a critical time for wireless carriers to have a comprehensive customer service strategy in place.” The main reason is the large number of contracts set to expire in June thanks to a limit set by the Wireless Code of Conduct.

The study examined Rogers, Bell, TELUS, Fido, Virgin, SaskTel and Koodo Mobile. The study goes in-depth how consumers view their service and the carriers’ retail experiences. The scores are based on a 1,000-point system, and for the fourth straight year regional carrier SaskTel tops the chart with 787 points, followed by Virgin Mobile with 773 points and Koodo Mobile with 764. As for the big three, Bell and Rogers had the lowest satisfaction scores with 690 and 675 points respectively.

The study was formed by surveying 5,000 wireless customers between October 2014 and March 2015. Apparently, 48 percent of “delighted customers,” which are those who scored 900 points or higher, say they “definitely will not” switch carriers. In addition, 69 percent of the same category say they “definitely will” put in a good word and recommend their carrier to others.

The main difference, according to J.D. Power, between excellent and poor customer experience is the “clarity of information provided and timeliness of care contacts.” While most carriers have in-store and call centers to deal with customer service issue, many have also transitioned to offer online assistance such as live chats or Twitter.

Adrian Chung, account director at J.D. Power, said, “Customer service needs to excel at every touch point. Carriers need to focus on timeliness and accessibility with every customer interaction, which can help differentiate carriers from their competition, satisfy customers and ultimately drive loyalty and advocacy.” 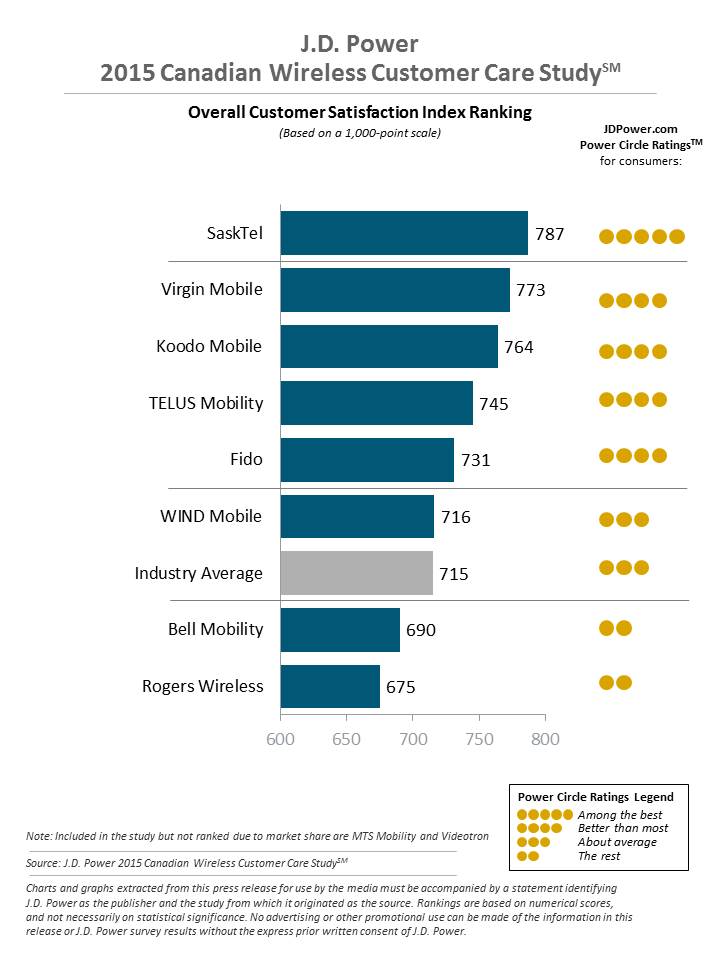 The survey comes a day after Telus revealed a new marketing campaign revealing that Canadians need to “Expect More” from their carriers. Telus’s grown in recent years has been centred around improved customer service.