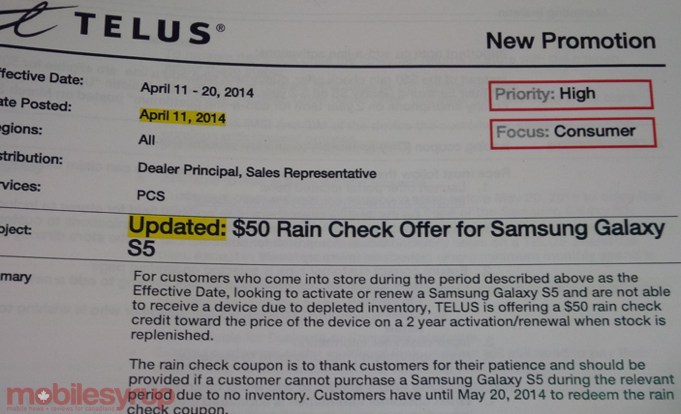 A repeat of the past couple years has occurred once again. When Samsung Canada released the Galaxy SIII in 2012 and Galaxy S4 in 2013 many carriers offered up a $50 credit to those who were unable to find one. The reasons were caused by low inventory as both devices were in “high demand.”

The Galaxy S5 has experienced the same fate. TELUS is now offering up a $50 “rain check” credit for those customers who cannot find a white or black version of the new flagship. According to an internal doc we received it notes that a $50 credit will be applied to a customers bill when the GS5 comes back in-stock.

TELUS says this credit is available for customers who try and buy between April 11th and 20th. “For customers who come into store during the period described above as the Effective Data, looking to activate or renew a Samsung Galaxy S5 and are not able to receive a device due to depleted inventory, TELUS is offering a $50 raid check credit towards the price of the device on a 2-year activation/renewal when stick is replenished.”