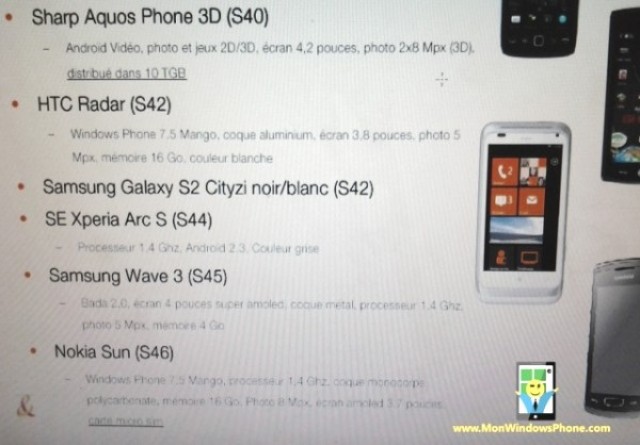 Nokia World is less than 2 weeks away and the leaks are slowly happening. There has been so much anticipation of the newly rejigged Nokia with the Windows Phone Mango OS, some say they’re “absolutely stunning” while others have ranked them an 8/10. At the end of the day, it’s a good move away from the frustrating Symbian OS.

The only device that Nokia has officially shown off was the Sea Ray. The rumoured ACE and Sabre have in some capacity unofficially leaked online. Today, another device has surfaced, the Sun , this could be another name for Sabre and has a unibody polycarbonate design with a 3.7-inch AMOLED display, 1.4Ghz processor, 8 megapixel camera.

According to the leaked document this is estimated to hit France between November 7-13th. The only news we know about Canada scoring some, or all, of the upcoming Nokia Windows Phone handsets was during an interview with Chad Saliba, Portfolia Collaboration Manager for Nokia Canada, who stated that they are currently in talks with Rogers, Telus and Bell to launch multiple devices. No official word on the availability, most likely early-mid 2012.