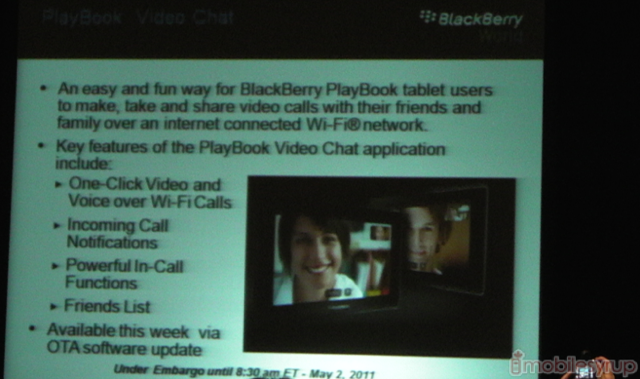 For those who have the BlackBerry PlayBook you’ll be thrilled to know RIM has released an official video chat app. The app is free and gives you the ability to make and receive video called between PlayBooks over WiFi. This app will be available on May 3rd May 3 and will be pushed out to PlayBook owners OTA (Over the Air) and will also be available in the BlackBerry App World.

From the press release here are the highlighted features:

• One-Click Video and Voice over Wi-Fi Calls – with just one click users can make a call from their Video Chat contact list, log of recent calls or simply by entering the BBID email address of the person they want to call.
• Incoming Call Notifications – users will receive a notification pop-up when a new video call
comes in, allowing them to accept the call as either a video or voice call, or decline the call. For those quiet moments – such as when while watching a movie or playing a game -users will also have the ability to simply set the “Do Not Disturb” option and the BlackBerry PlayBook will automatically ignore all incoming calls.
• Powerful In-Call Functions – by using the picture-in-picture function users can easily preview their own video image prior to placing the call in order to see what will be displayed on the other end. They can also easily switch cameras from front to rear so their friends can see what they are seeing, and for private moments users can mute/unmute audio or make or take calls using voice only.
• Friends List – BlackBerry PlayBook Video Chat comes complete with a Friends List for maintaining your favorite contacts. A picture can easily be added to a contact to personalize the entry and a Call Log makes it simple to keep track of received and missed calls.

We’ll have a video of this in action shortly!