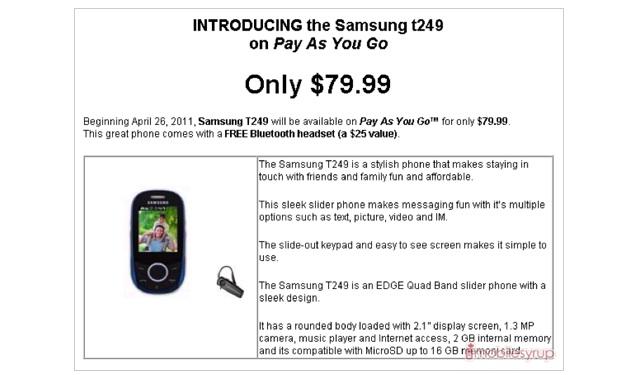 The Prepaid market is getting competitive these days in Canada – more so since the new entrants started offering affordable no-contract phones. Rogers has added the Samsung T249 to their “Pay as You Go” prepaid lineup. The T249 is a basic slider that has a 2.1-inch display and a 1.3 megapixel camera. I can see this eventually making the way over to Chatr Wireless soon but for now Rogers has priced the T249 at a respectable $79.99 and also including a Bluetooth headset.

This has not yet been put on the Rogers site but is available today.
(Thanks tipster!)

Rogers Samsung Galaxy Note dropping to $49.99 on a 3-year at Future Shop tomorrow