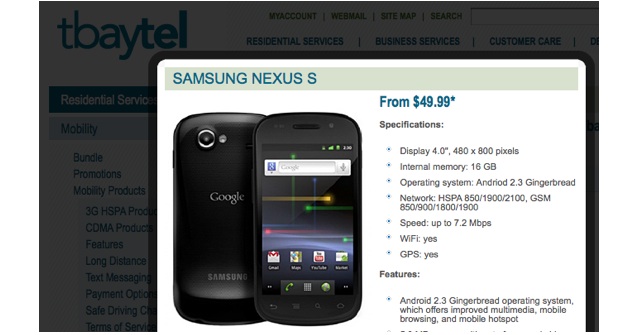 The Nexus S is one of the first smartphones to be widely available across multiple carriers, thus creating a price war. The 3-year contract price ranges from $99.99 to $149.99 depending on who you get it from. In addition, the no-term pricing is the most heated from a low $425 to $525. We’ve forgotten to mention Tbaytel way up north who has an arrangement with Rogers for devices. They started to carry the Nexus S and have by far the greatest spectrum of price plans. They actually come in the lowest at $49.99 on a 3-year contract but skyrocket to the most expensive at $549.99 no-term. If you’re thinking no-term it’s probably best to make the trek a few kilometers to any one of the other carriers and save some money.