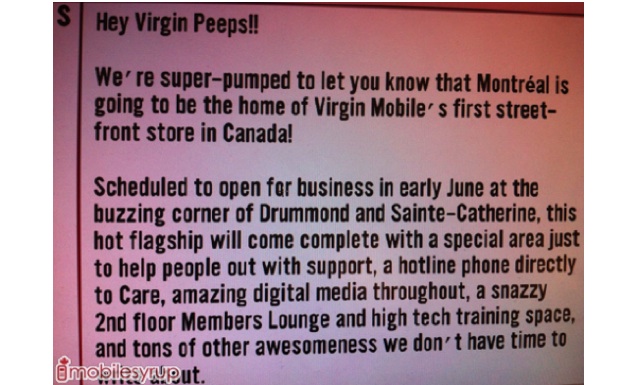 Over the past few months Quebec has been a hotbed for wireless competition. We’ve seen carriers unleash all sorts of Unlimited/Infinite monthly plans. In addition, various bundle packages were created to quickly enroll new customers. When Videotron launched their new 3G+ network they wanted to make a big splash and built a new sexy looking flagship store on Sainte-Catherine St. West in Montreal.

Having massive presence in beautiful Quebec is top of mind for all the carriers and their sub-brands. Take Bell’s Virgin Mobile for example… We’ve been informed that they’ll be expanding past the mall kiosks and building out a brand new first ever store front location. Taking a quick read over the internal doc we received shows the Virgin is going to pimp out their new 2-level flagship store with a dedicated support area, a Members Lounge , a “high tech training space” and other “awesomeness”. This new store will also be on Sainte-Catherine and is expected open in early June. Just in time for the Summer parties.