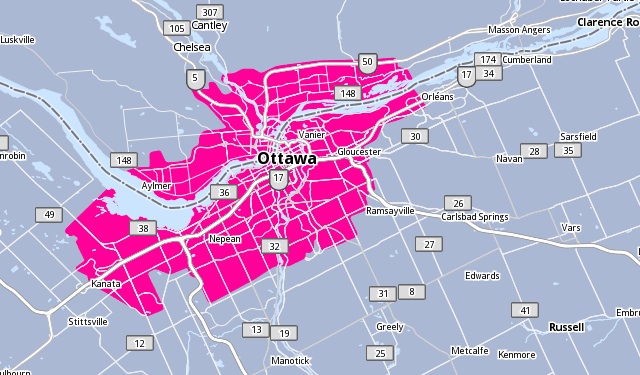 So now that Mobilicity has launched in Toronto, Edmonton and Vancouver… next up is Ottawa and it’s day to shine will officially be tomorrow! Mobilicity has updated their Ottawa coverage map and it’s above. The same “Grand Opening Specials” apply for this new city with various plan and device discounts. Future devices that Mobilicity will be releasing is the Motorola Spice (Android) for $199.99 and the LG Wink for $99.99.

So Ottawa… was it worth the wait?

Update: It’s official. Mobilicity is launching in Ottawa tomorrow and has 20 locations (30 by the end of the year). According to the press release Mobilicity Chairman John Bitove states that “If you like contracts, go to law school… But if you’d like to keep more of your hard-earned money, don’t lock in with incumbent carriers who keep short-changing consumers with surprise charges, extra fees and bad customer service.”

Check it out here at Mobilicity
(Thanks Mansal36!)