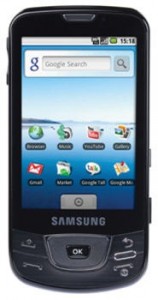 Specs and features of the Galaxy are that it runs off Google’s Android OS (version 1.5) so you have access to all the apps from the Android Marketplace, has a 3.2-inch AMOLED touchscreen display (made with tempered glass and anti-scratch), comes with 8GB of memory and can hold up to 40GB with a microSD card. In addition, other specs are the 5 megapixel camera with auto-focus, LED flash and video capabilities, 3.5 mm headphone jack, WiFi, 1500 mAh battery. The Galaxy weighs in at 116.7 grams and measures 116 x 56 x 11.9mm…which claims to be the thinnest Android device to date.

Check it out here at Bell.
We’ll have a full unboxing and review shortly!