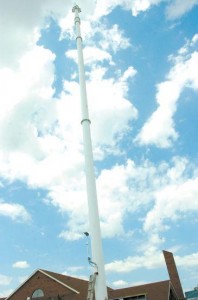 Rogers Wireless is building 4 new cellphone towers in the City of Kawartha Lakes and like always the residents and some councillors are not happy about the decision. Mayor Ric McGee says he’s got no say in where the towers are put up as that is an Industry Canada choice.

McGee said “I think this is a classic representation of lack of authority. Residents on Balsam Lake do not want to see anymore flashing red lights”. In addition Ward 16 Councillors David Marsh said “Big Brother is going to do what he wants to do”.

So what does the City of Kawartha Lakes get in return for the sexy towers in their face? They collect a fee of $1,000 for processing the applications. Nice.