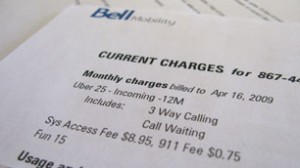 Apparently, as experienced with EVDO devices, the HSPA devices may be picked up by a U.S. cell tower and those customers are being billed US roaming rates. I’m sure this is not how Bell wants to start off so they have created the “Accidental Roaming in Canada” which ensures voice calls are billed based on their Canadian rate plan.

Accidental roaming does not apply to SMS or data and eligibility applies to the following:
– All Postpaid clients.
– All account types.
– Clients must be located near the U.S. border, in one of these regions:
— Ontario: Kingston to Cornwall; Windsor to Sarnia; Niagara on the Lake to Fort Erie
— British Columbia: Victoria area; White Rock.
– HSPA call placed or received and picked by an U.S. cell tower

The internal doc we received gave a couple examples:
“If a Montreal client places or receives a call while in Victoria and is picked up by a U.S. cell tower, the client will be billed based on their rate plan.”

“If the HSPA client has been picked up by a U.S. tower, the name of the carrier (e.g. AT&T, T-Mobile) will appear on the device. Clients can avoid such accidental roaming by placing the device in manual network selection mode and / or manually selecting the Bell network. The client can refer to their user guide for details on how to manually select the Bell network.”