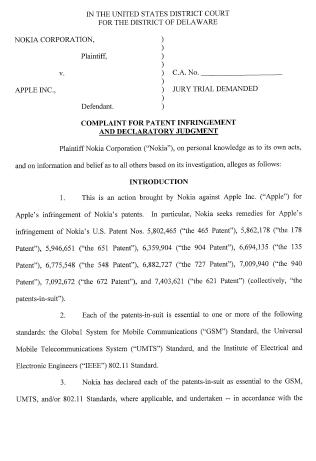 Last Thursday Nokia filed a complaint with Federal District Court in Delaware stating that Apple’s iPhone infringes on 10 of their patents that cover wireless data, speech coding, security and encryption.

If Nokia is successful they will collect an estimated $200 – $1 billion. If you’re bored today and have a few minutes for some light reading, check out the full 30-page submission by Nokia to the court. You read about the patents, how Apple was approched by Nokia and refused to communicate and how Nokia believes “Apple is attempting to get a free ride on the back of Nokia’s innovation.”

Here is a link to all the PDF file: Nokia’s Complaint: