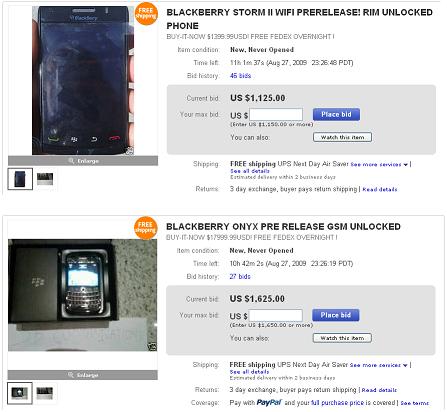 If you want to get your hands on the upcoming BlackBerry Storm II and BlackBerry Onyx before they come to Rogers/TELUS/Bell… all you have to do is put your bid on eBay! They both have popped up and can be yours within the next day (depending upon shipping).

Canadian seller “sb.communications” says the BlackBerry Onyx its “New, Never Opened” and you can buy it now for $17999.99USD or put your bit in as its currently going for only $1,625.00 (bidding ends Aug 27, 200923:26:19 PDT). They describe it as “The first cellphone will be the Onyx which features a HVGA+ display, 3.2-megapixel camera with autofocus and image stabilization, QWERTY keyboard, trackball, 256MB of flash memory, GPS, WiFi, Bluetooth 2.o, 3.5mm headphone jack, microSD slot, quad-band GSM/GPRS/EDGE, and tri-band UMTS/HSDPA, GSM/GPRS/EDGE/UMTS device, GPS, Camera, Wi-Fi (no UMA support), QWERTY keyboard, 480×360 resolution screen”.