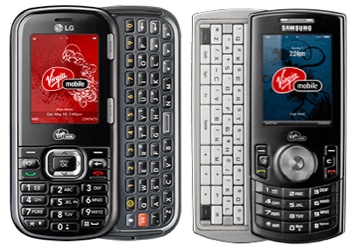 It wasn’t that long ago that we saw both the Samsung Vice and LG Rumour2 appear hidden on the Virgin Mobile Canada website. They have officially released both of these devices now.

The LG Rumour2 has a design similar to the original Rumour but now it’s has more curves to it. With overall dimensions of 4.41 x 2.05 x 0.70 inches, this is still lightweight at only 4.23 oz. It has a slide-out 4-row QWERTY keyboard with designated emoticon key and dedicated directional left, right, up and down keys now added. This has a 2-inch display with a 240 x 320 and has increased the expandable memory to hold up to 12GB. Other features of the Rumour2 are 1.3-megapixels with video capabilities, GPS Nav, Music player, 2.5mm stereo headset jack, Bluetooth Connectivity, Speakerphone. The Rumour 2 comes with changeable back plates so you can somewhat personalize this yourself.

The Samsung Vice, once only a Bell exclusive, now available with Virgin is also available on the following price plans: 3-year is $79.99; 2-year is $129.99; 1-year is $149.99 and Prepaid for $149.99. The Vice is a slide out full QWERTY keyboard with a 2 megapixel camera with video capabilities, MP3 player, picture and video messaging, Bluetooth, 3.5mm headphone jack, GPS and expandable memory up to 8G.

More here on the Vice at Virgin

Virgin Mobile to rebrand as Virgin Plus on July 19th