Rogers advertises the “Revolution” across Canada 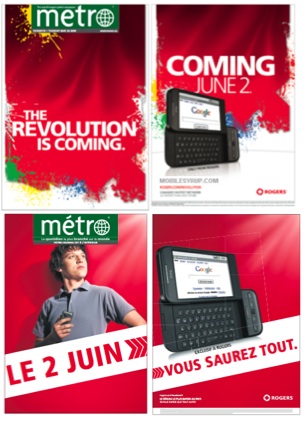 In today’s Metro newspaper in all locations (Calgary, Edmonton, Halifax, Montreal, Ottawa, Toronto and Vancouver) Rogers has put the word out that the “Revolution is Coming June 2nd”. They have taken over Page 1 and Page 2 of the paper with an ad promoting the upcoming HTC Android devices.

It’s interesting that the Montreal ad is the only one that features a person and what looks like a sunshine ray of hope, rather than the splattered colours. In addition, on the Montreal version it looks like they are showing the HTC Dream but I was unaware that the Black version has a silver backing?