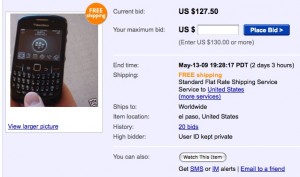 a first for BlackBerry devices. Rather than the trackball which the RIM handsets have become somewhat known for, the 8520 uses a tiny camera – similar to that on the original Samsung Omnia – to control direction. Whereas the success of the Omnia’s optical trackpad was mixed, the 8520’s is seemingly much better.

This is a T-Mobile release which means its compatable on all GSM networks. Unfortunately, that can’t make up for the absence of 3G, the sub-par 2-megapixel fixed-focus camera, and a 320 x 240 screen that is “a step down if you’ve ever used the Bold, 8900, Storm or 9630″