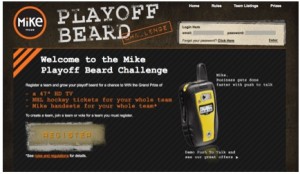 Another contest up here in the Great White North. Let’s round up what we have going on with the carriers and us too. First, we have the Nokia E71 Mother’s Day Giveaway and our Forum Contest. Bell has a NHL Award contest, Depeche Mode contest and even Sony Ericsson joined the party with their Best Mate contest that can send you to Vegas.

For all you hardcore NHL playoff fans, TELUS has launched the “Playoff Beard Challenge” through their Mike Network. It’s will actually be entertaining to watch the growth! Basically you enter your team, up to a max of 10 and start growing your playoff beard. You upload a current photo of all team members and choose your “starting line-up” and as the growth of your beard gets bigger you can swap team members in and out to join the starting line-up. The objective is to obtain the “best playoff beard”.

The Mike Playoff Beard Challenge goes until 11:59 p.m. on Sunday, May 31, 2009. If you don’t want to grow a beard you can still contribute and vote online for the best team. The contest is open to residents of Canada, but not available to those who live in Quebec.

Motorola i1 arrives on the Canadian site, destined for TELUS’ Mike and Airtel