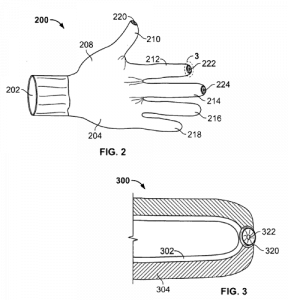 Some parts of Canada are experiencing the worst winter snow in history, other parts are hardly getting hit – just because there’s no snow doesn’t mean that it’s not blistering cold here.

Good news for the iPhone users up in Canada. Apple has filed a patent named “High tactility glove system” that would see specially designed gloves for your iPhone (and other touchscreen devices) that make it easier to use the touchscreen in cold locations… this will be your ultimate Canadian iPhone winter accessory! (This patent application was originally filed 1-day before the official iPhone launch back on June 28th, 2007)

The patent is officially described as: “This invention is directed to a glove system for operating an electronic device. The glove system may include an inner liner and an outer shell. The liner may be formed from any suitable material, including a material that is thin, electrically conductive, has low thermal conductivity, and/or has an “anti-sticky” finish. The outer shell may include at least one aperture through which the inner liner may extend to operate the input mechanism of an electronic device (e.g., on at least one finger tip). In some embodiments, the aperture may be at a finger tip of the outer shell. In some embodiments, a closing mechanism may be used to maintain the aperture closed when the user is not operating the electronic device. For example, an elastic ring may surround the aperture such that, in its non-deformed state, the aperture is substantially closed. The user may elastically deform the ring to allow the liner to pass through the outer shell.”

More info here from the US Patent Office.