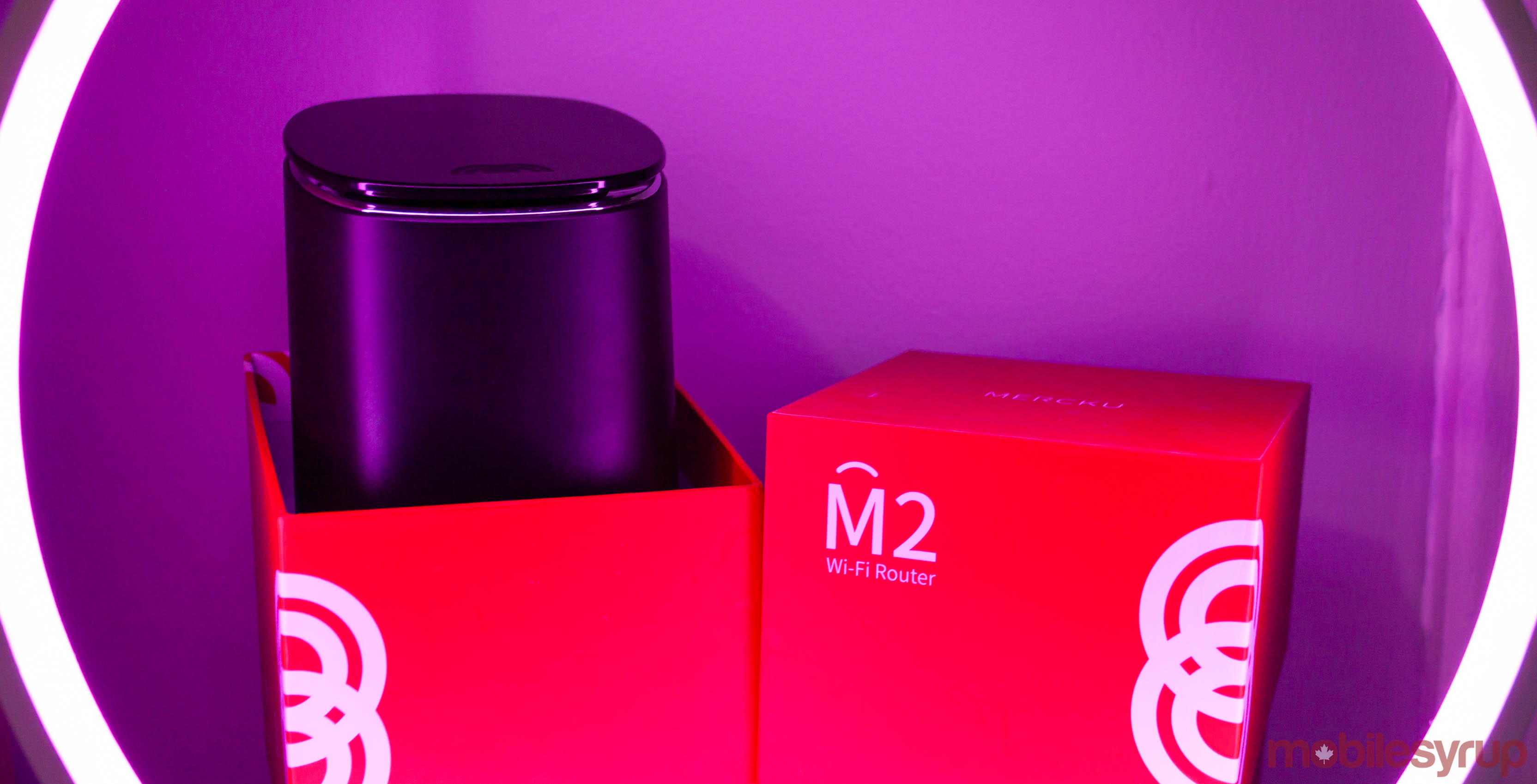 Wi-Fi is a significant staple of most people’s homes and businesses. It’s also something we don’t think about often unless it’s not working.

Thankfully, Waterloo-based Mercku does think about Wi-Fi, and how it can make it better, such as offering high-quality hardware and a superb software experience. Having spent a few weeks with the company’s debut M2 router, I’m not sure how I can go back to my old Wi-Fi.

It should be noted that I tested not one but two M2 routers, one of several configurations you can get from Mercku. The company offers its M2 routers as a standalone device, or you can get its ‘Hive’ mesh Wi-Fi system, which comes with four small ‘Bee’ nodes to spread around your home. Finally, Mercku plans to offer a ‘Swarm’ option which supes up mesh Wi-Fi by swapping out nodes for additional M2 routers.

Swarm wasn’t officially available at the time of writing, but when it is, customers will get three M2 routers that can work in tandem to provide excellent network coverage. I only used two M2 routers in my testing, but they were more than enough for my apartment.

On top of great hardware and software, Mercku’s routers offer straightforward, if time-consuming, set up processes. 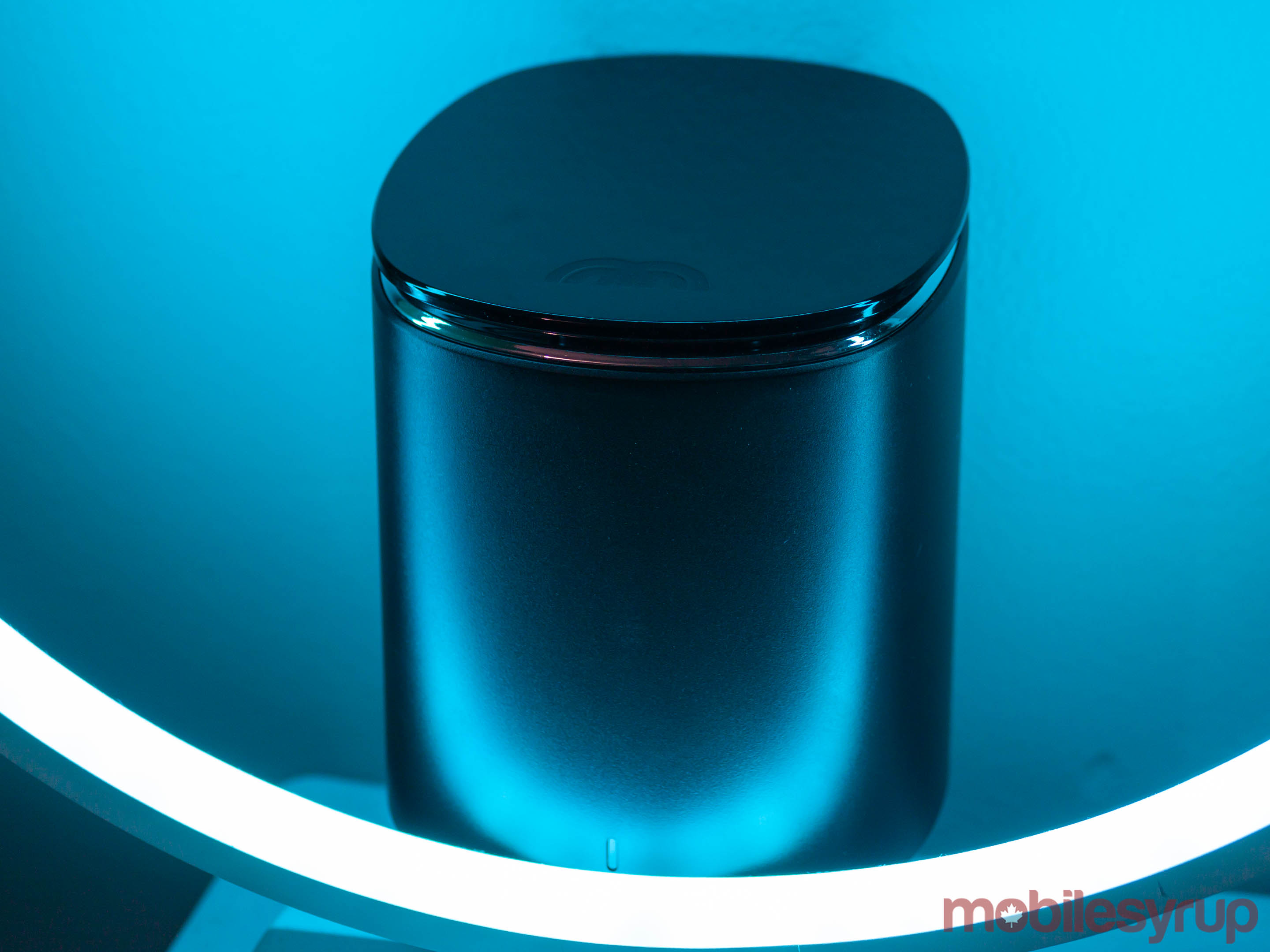 My first few hours with the M2 were challenging, to say the least.

I must stress that neither Mercku nor the M2 router caused the issues I experienced in switching from my old router. Instead, my issues stemmed from a broader problem: too much tech.

First up, a warning to those who, like me, have not dabbled in routers outside of what’s provided by your ISP: you’ll want to do some research.

The first part of my journey involved switching the ISP router into ‘bridge mode’ so I could use the M2 as the Wi-Fi access point. With a quick Google search, it wasn’t too difficult to make this switch. However, it meant that my old Wi-Fi network disappeared as the Mercku one sprang to life.

Because of the abundance of tech I have in my apartment, I wanted to set up the M2 with the same network SSID (name) and password as my old Wi-Fi so I wouldn’t have to reconfigure connected devices. Mercku caps the length of the SSID name, meaning my overly long SSID wouldn’t work, and I had to reconfigure all my devices for the new network. Worse, in the case of most of my smart lights and Google Homes, I needed the old network online so I could disconnect them within their respective apps.

In hindsight, I could have factory reset these devices and saved myself a lot of pain.

Ultimately, whether you choose to switch to an M2, or any other router, make sure you set aside ample time to make the switch, especially if you have several connected devices to deal with.

I was lucky, and got my old Wi-Fi and new M2 network online simultaneously, and was able to switch everything over before putting the ISP router back in bridge mode to eliminate signal interference.

Beyond that, the physical setup of the M2 was largely plug and play. Once the router was on, powered and connected to my modem, I simply connected to it with my phone and used the app to set my SSID, password and other settings. 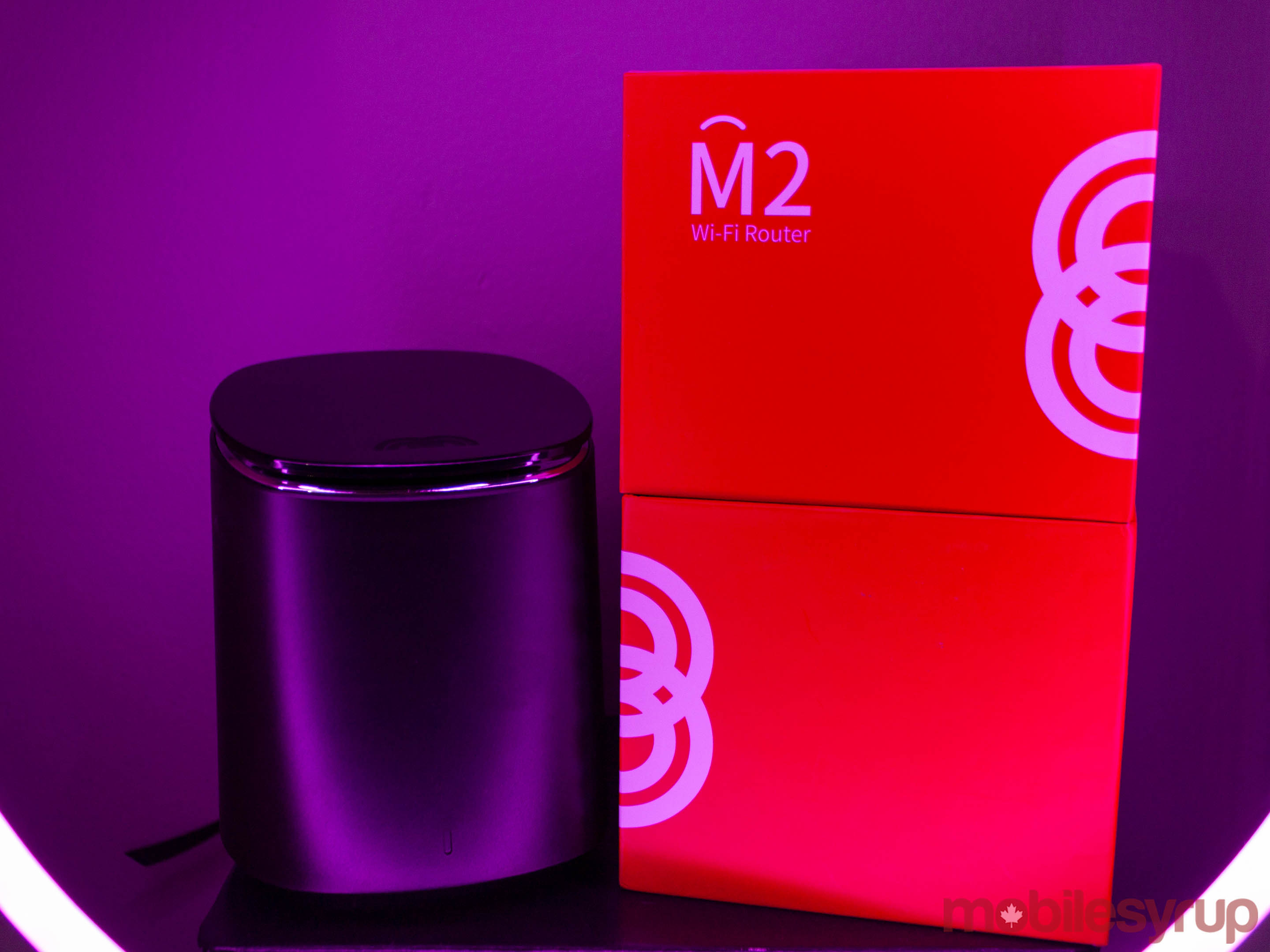 With the setup out of the way, I was able to kick back and enjoy the benefits of Mercku’s hardware.

First, the M2 is stylish. Most routers aren’t. My ISP-provided router certainly wasn’t. It was a large, slatted white box covered in flashing lights, and despite wanting to hide it, for the sake of good signal, I had to have it out in the open.

Mercku came to my rescue, thankfully, with the M2’s small, black cuboid shape that will fit just about anywhere in your home.

Mercku also did away with a common — and annoying — part of routers: the flashing lights. The only visible light is a small LED on the front that is either green when everything is working (read: all the time) or red if there’s an issue.

Specifically, Mercku says it boosts the communications chip to its physical limits: -90 decibel-milliwatts (dBm). The company says the current industry average is between -50 and -70dBm, which is about 1/100th the power of -90dBm.

Practically, this means the M2 is capable of 2.4GHz speeds of 300Mbps and 5GHz speeds of 867Mbps, up to 3,000 square feet of coverage for a single router and plenty of power for homes packed with tech. Unfortunately, the M2 doesn’t support Wi-Fi 6. That’s not a big deal now, but as adoption of the newest Wi-Fi standard spreads, it’ll be an issue in the coming years.

In my experience, however, what really sets the M2 apart is Mercku’s software offering.

Software that stands out 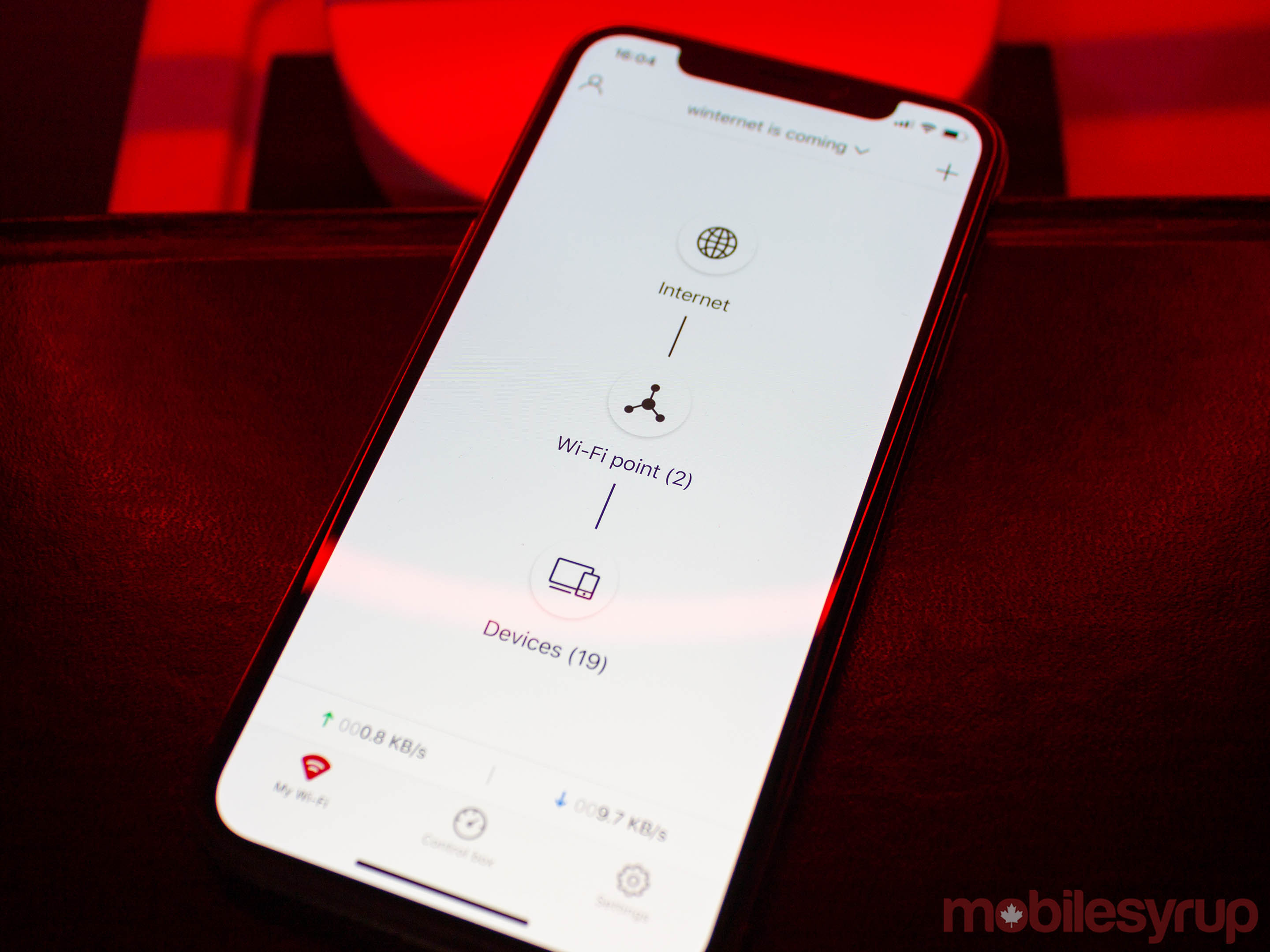 I’ve had the M2s for about a month, and Mercku has pushed several firmware updates already. All of them improved or added significant features to the smartphone app and routers. Even when I thought it couldn’t get better, Mercku found a way to improve.

The app lets you manage your Wi-Fi’s security — like SSID and password — implement parental controls like time restrictions or speed limitations, blacklist devices, keep tabs on connected devices and much more.

One of my favourite features was the ability to perform network diagnostics right from the app. I loved being able to check network performance quickly, and it made troubleshooting super easy. The app lets you check device-to-router performance (or, you LAN performance) as well as router-to-internet performance in the form of a speed test like those offered by Ookla and Fast.com. 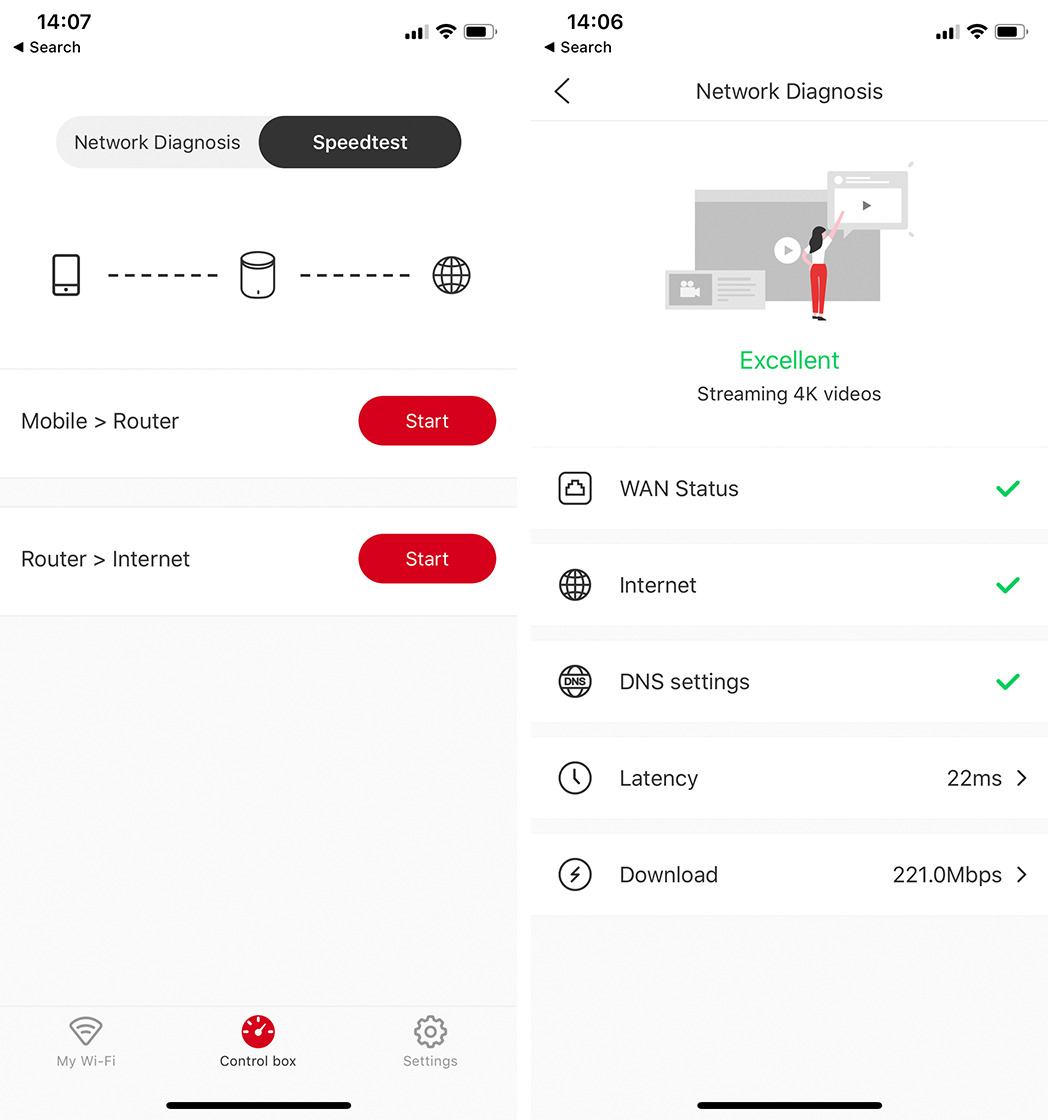 However, for all the good in Mercku’s software, there were a few stumbling blocks. The biggest issue I had was with a feature dubbed Smart Connect, which combines 2.4GHz and 5GHz bands into a single SSID. Most routers offer separate SSIDs for each band (one 2.4GHz ‘SSID’ and an ‘SSID-5G’ for 5GHz).

On the surface, Smart Connect seems excellent. By offering a single SSID, the M2 ensures users don’t have to figure out which band to use when setting up a device.

However, I found the feature very hit and miss, with relatively new devices like my Roku smart TV, Chromecasts and some — but not all — of the Google Home and Google Home Minis in my apartment routinely losing connection to the internet. The culprit? Smart Connect.

Ultimately, I had to disable the feature. I’d recommend trying it first, but if you find any of your devices act up, turning it off will give you separate SSIDs for each band, and things should work fine after that.

If you’re in the market for better, Canadian-made Wi-Fi, Mercku’s M2 is an excellent option. Unfortunately, it comes at a premium.

Mercku’s website gives you two options to buy: Amazon or its Indiegogo shop. The former links to Amazon.com, so make sure you switch over to Amazon.ca for Canadian pricing.

Actually, you may not want to do that.

The M2 will run you around $265 CAD — the price on Amazon.ca fluctuated while I was putting together the review, but it hovered around this mark.

However, the M2 costs $119 USD (about $158.93 CAD at time of writing), and if you buy through Indiegogo, you’ll pay $159 CAD. In other words, buying through Amazon.ca will add a $100 markup to the router, which makes it significantly less appealing in my opinion.

Compared to other routers from Linksys and D-Link available at Best Buy Canada, the M2 is quite expensive.

Things get worse when you look at Mercku’s Hive mesh Wi-Fi option, which clocks in just shy of $600 CAD. Indiegogo and Amazon.com offer it for $299 USD (about $399 CAD) meaning there’s a $200 markup on the Hive system.

Compared to other mesh Wi-Fi options, Mercku’s Hive comes in at almost double the cost of Google Wi-Fi and about $100 more than Linksys Velop.

Mercku says its working to update the Amazon.ca listing, as well as bring the M2 to other Canadian retail channels. Further, it recommended that Canadians interested in its products should use the Indiegogo page when making a purchase.

Considering the better pricing available through Indiegogo, the M2 and Hive both fall into similar price categories to competing products, which I think makes Mercku’s Wi-Fi solutions a more compelling buy.

That said, the M2 isn’t a future-proof purchase, lacking things like Wi-Fi 6 that, while not necessary, will be valuable in the next few years.

Furthermore, you’re likely paying a fee for your current ISP-provided modem/router already, which makes it harder to justify paying more for Mercku’s excellent router. Unless you need more range out of your Wi-Fi, you may be better off with what you have now.