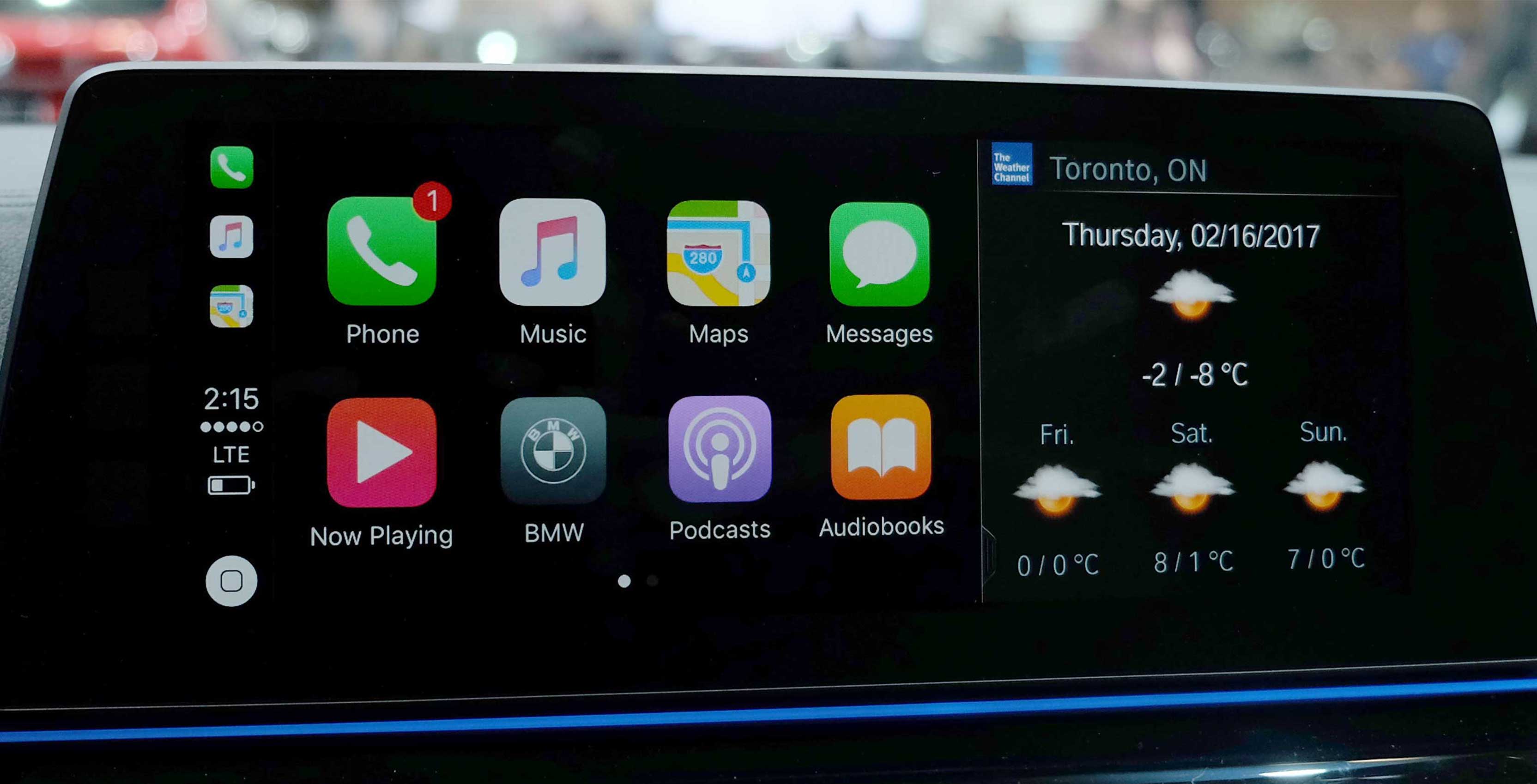 It took a while, but in-car infotainment and technology is finally grabbing some of the spotlight at the Canadian International Auto Show (CIAS) in Toronto.

The auto show circuit that traverses the world has almost always focused on design and engineering, making it a heavenly showcase for gearheads interested in the inner workings under the hood.

Now, tech is getting some attention, and Canada seems to be on the road map. Driver assist features, like lane guidance, parking assist and other sensory-based elements, usually come to the Great White North at the same time they do in the automaker’s country of origin.

Infotainment often doesn’t, and so some of what was announced or unveiled at this year’s AutoShow is catching up to what other markets already have. Here are some of the main ones to look out for as the show runs from February 17th to the 26th.

Toyota and Lexus catch up 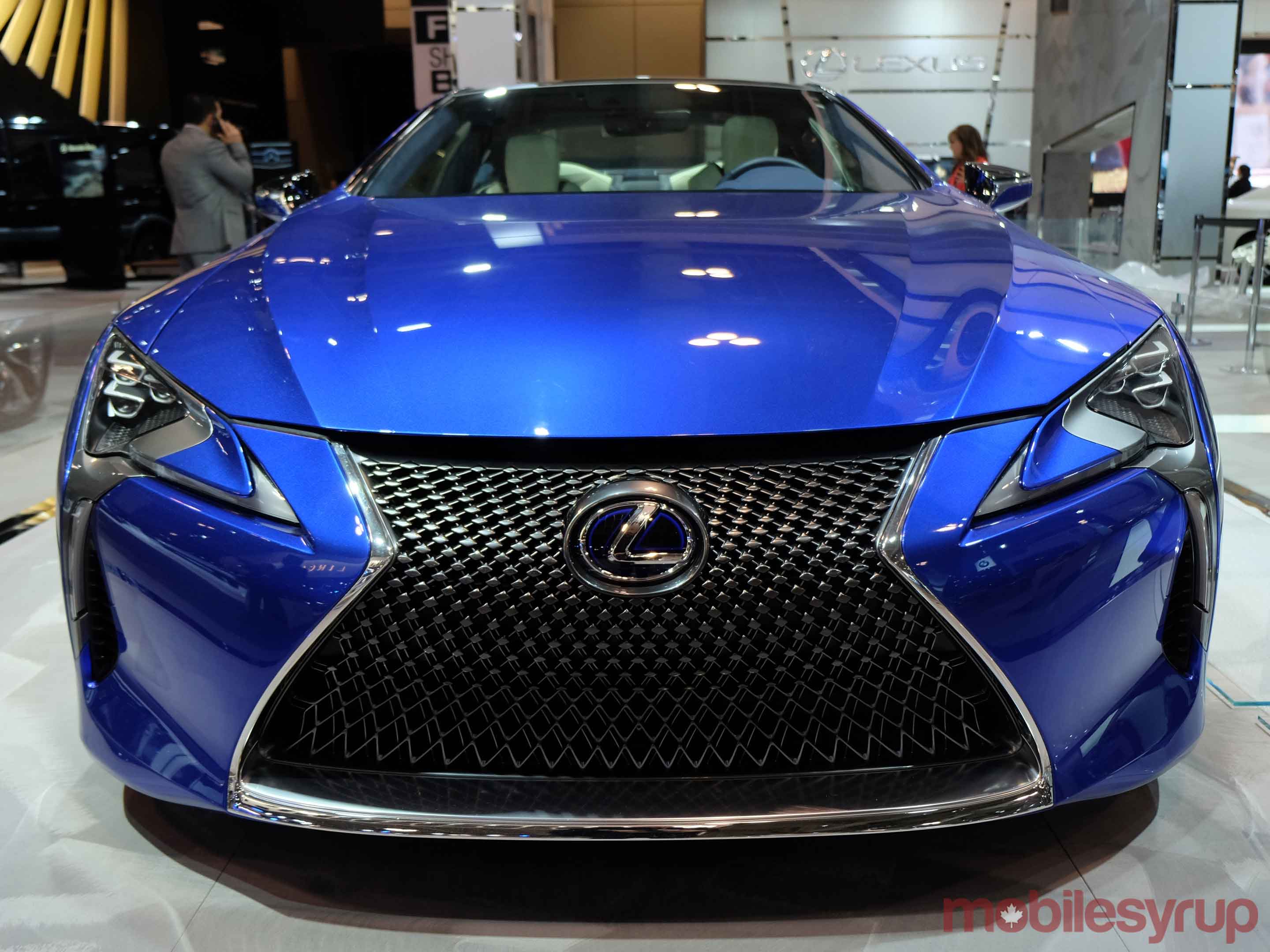 Starting this year, Toyota will finally bring its Entune infotainment system to Canada. It will roll out first with the latest Camry models, and then other lines that are equipped with the same newer head unit. As you can probably guess, there is no backward compatibility, so if you currently drive a Toyota vehicle, there is no way to get the new system.

Evidently, it also won’t be a full suite from the outset. Stephen Beatty, vice-president of Toyota Canada, spoke with MobileSyrup about what can be expected from Entune. The App Suite comes with the fully-loaded Entune package, so app integration isn’t offered throughout.

“We have our own team at Toyota Canada that’s busy looking at the apps that we think will work best out of the ones available in the package, and what we should be developing, either here or in collaboration with the U.S,” said Beatty. “We’re beginning to look at those questions of how do you ensure those systems continue to live and evolve, or else you end up with electronics that age the vehicle.”

This does include Safety Connect and Destination Assist, which offers assistance through a live operator in case of a collision and help in finding a place of interest.

Entune will work perfectly fine with iOS and Android phones, but in going this route, Toyota will continue to hold out from adopting Apple CarPlay or Android Auto, with Beatty citing privacy concerns in both cases.

“The moment that you put Google or Apple inside the head unit of your car, you’re also delivering a lot of data to both of those organizations,” he says. “Think about what’s in there today — we have black boxes connected to airbag deployment, navigation system collecting location data and internal computers monitoring speed and vehicle operation.

You’re overlaying data on top of data, and introducing Apple or Google into the mix, that data becomes a little less secure. I have some concerns about how quickly we walk through this from a Canadian standpoint.” 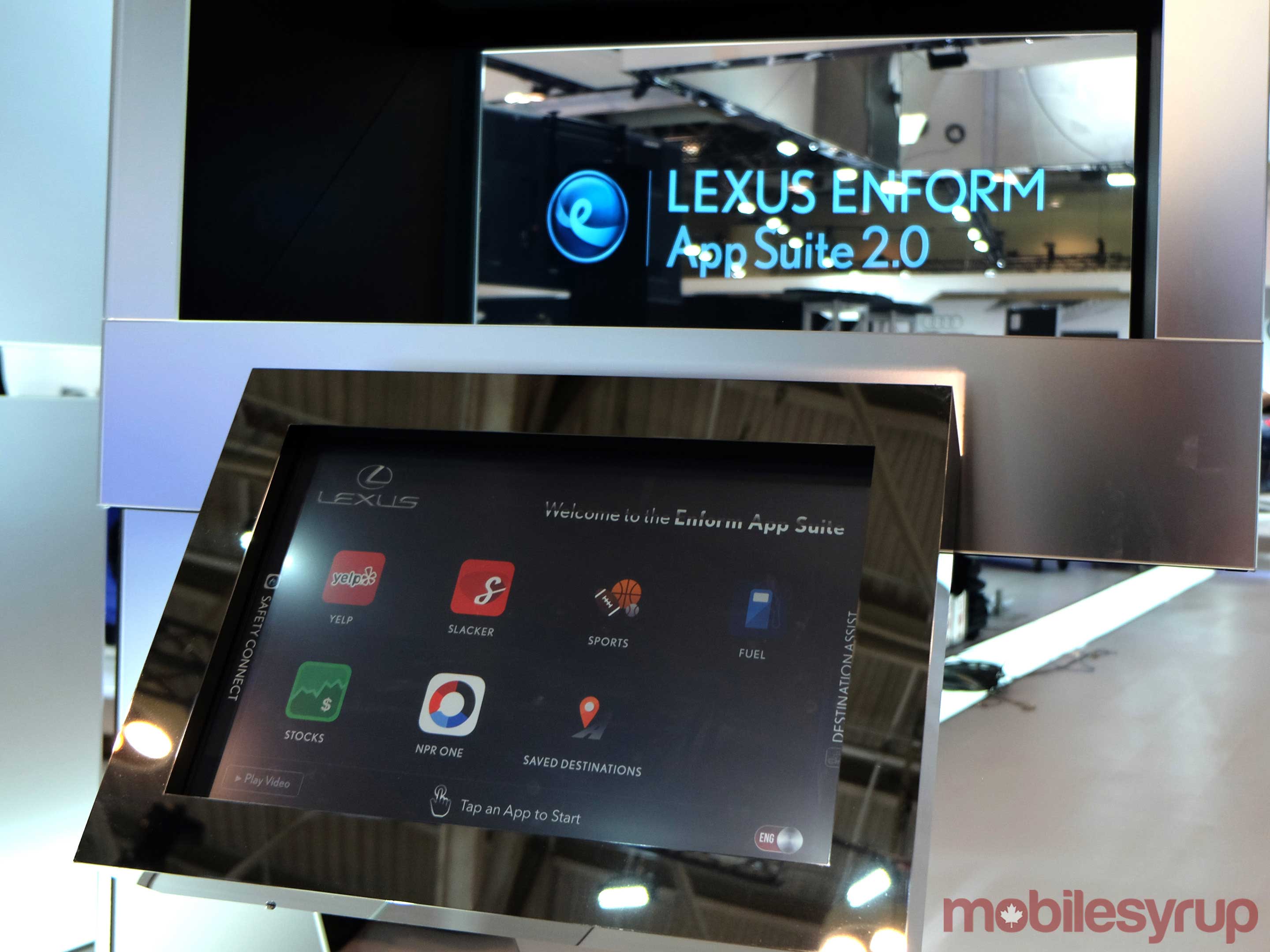 That still means Google Now or Assistant won’t have native integration, the way Siri Eyes Free works through the voice button on the steering wheel controls.

A similar situation applies to Lexus, where Enform will now be rolled out to Canada, first with the 2017 LC series couple and 2017 LS luxury sedan. Enform is an offshoot of Entune, so features like Safety Connect and Destination Assist, along with the app suite, are going to be included.

It’s not immediately clear what the app lineup will look like because Lexus will reveal those details when the cars launch this year. Again, there is no backward compatibility, and no support for CarPlay or Android Auto.

There were no working models of either Entune or Enform on the show floor, other than a display for the latter at the Lexus booth, so there was no opportunity for hands-on time. 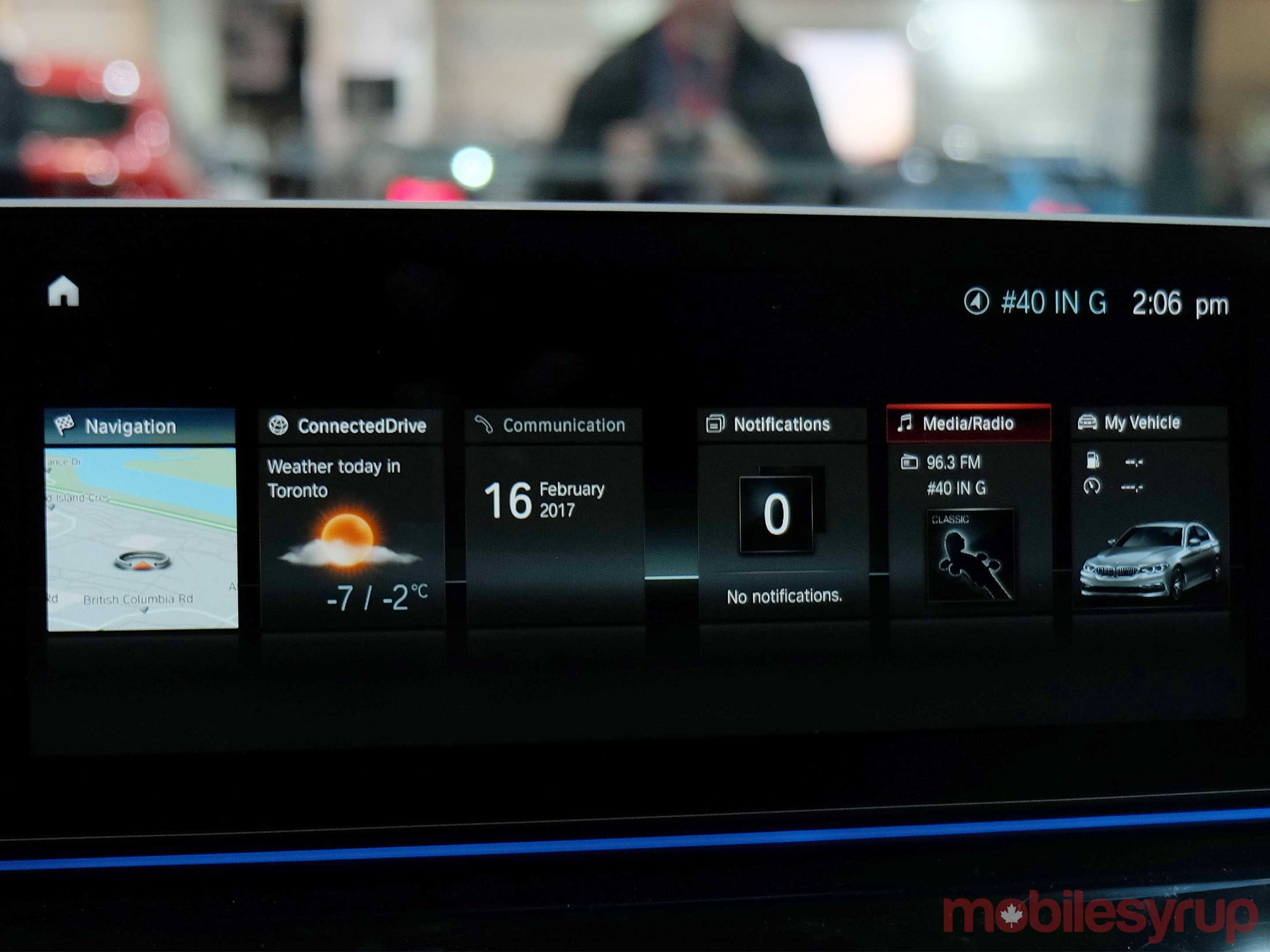 BMW is giving its iDrive infotainment system a few tweaks, bumping it up to 6.0, which is fast considering 5.0 only launched with the 7 Series in late 2015. Many of the features were covered in a prior review, so what’s new here is a focus on enabling touch gesture controls, while bringing CarPlay into the mix with the 2017 5 Series.

The wide letterbox display is back, albeit with a tile-based layout that is customizable to rearrange them in whatever order you please. It is a capacitive touchscreen, much like that of the 7 Series last year, except this one felt a little more natural because the interface invited more touch input.

Mind you, my first impression is that touch is more focused on the home screen, mapping and CarPlay, not so much on the rest of the menu system, which retains its previous look and feel. It’s a nice change, and gesture controls are pretty neat when you learn how to use them. Unfortunately, there’s no way to create your own.

CarPlay will run solo here because Android Auto isn’t included, despite the technical capability already being present. The wider display allows the CarPlay home screen to appear on the left. The interface can be controlled either by touch or the rotary wheel on the centre console. Another technical point is that CarPlay could be added to the 7 Series from last year, except BMW hasn’t confirmed whether it would actually do that or not.

Wireless charging returns and acts as a hardware input, meaning this would be one of the first vehicles that could do wireless CarPlay while charging wirelessly. A review of iDrive 6.0 will be up on MobileSyrup soon to see how well it all works. 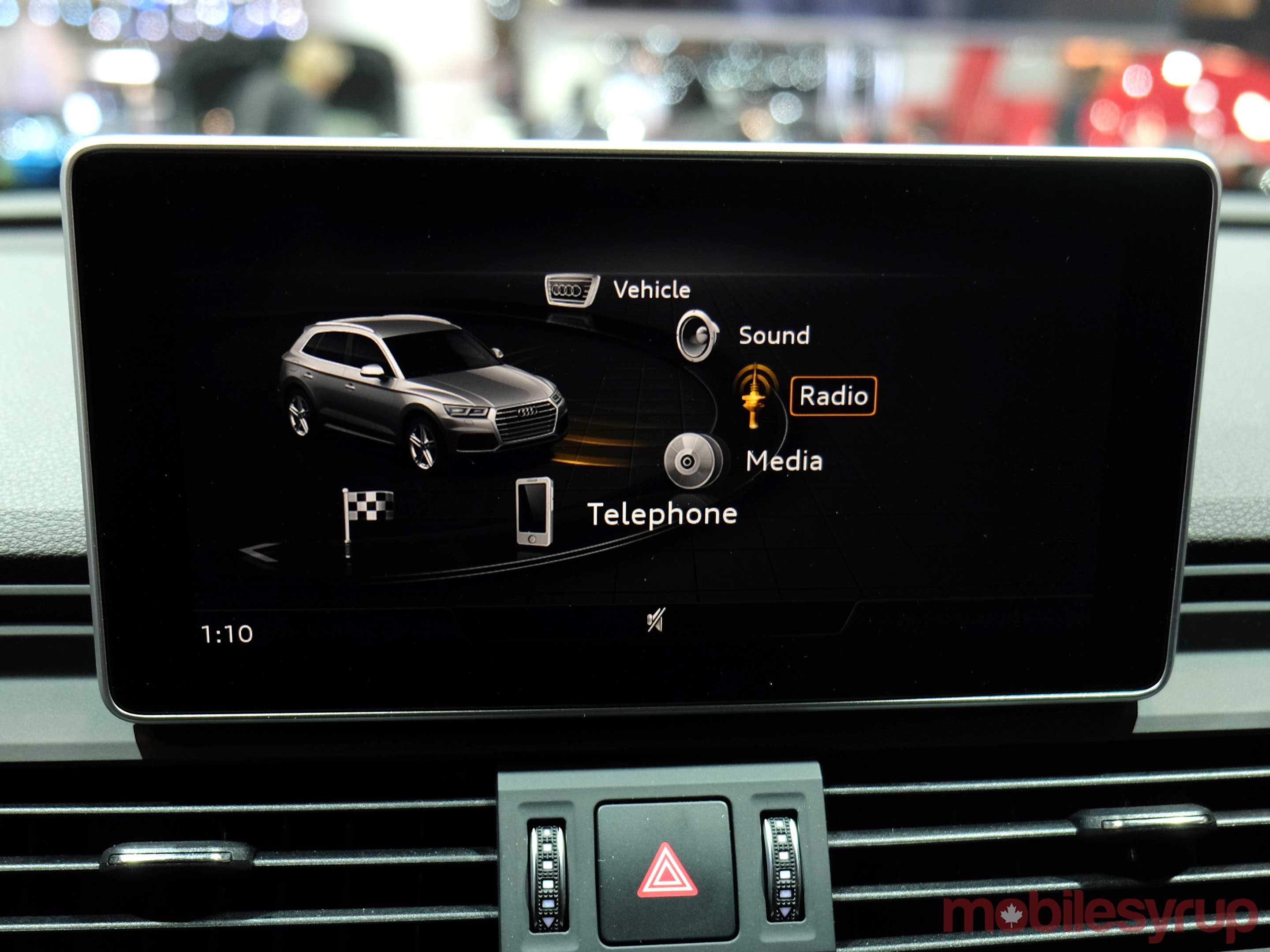 Volkswagen will introduce gesture controls in select vehicles sold in Canada this year, including the e-Golf all-electric, but the 2018 Tiguan will get the same treatment.

Mercedez-Benz has a number of vehicles in its booth, including a VR experience that you can also check out at home through a Cardboard headset.

Hyundai unveiled the new 2018 Accent, which will come with CarPlay and Android Auto, finally bringing both platforms to one of the automaker’s most popular models. It’s a small blessing too, considering other models had received retroactive software updates in the U.S. to enable both to work starting last year. Due to hardware differences, Canada was never included.

Chrysler’s Uconnect will be available for hands-on demos for attendees, particularly on the Pacifica.

The 2017 Chevrolet Bolt EV is back at the show this year in advance of its availability in Canada this year.

Tesla is not at the show this year, but there are several other electric vehicles on hand, and they each have some level of connectivity and mobile integration native to them. How much of that is open to see depends on the automaker and whether product experts have phones connected to them.

As far as the Canadian circuit goes, Montreal was the first to host an auto show in January, and will continue in Calgary March 15th to the 19th, Ottawa March 16th to the 19th, Vancouver March 28th to April 2nd, and Edmonton April 20th to the 23rd.