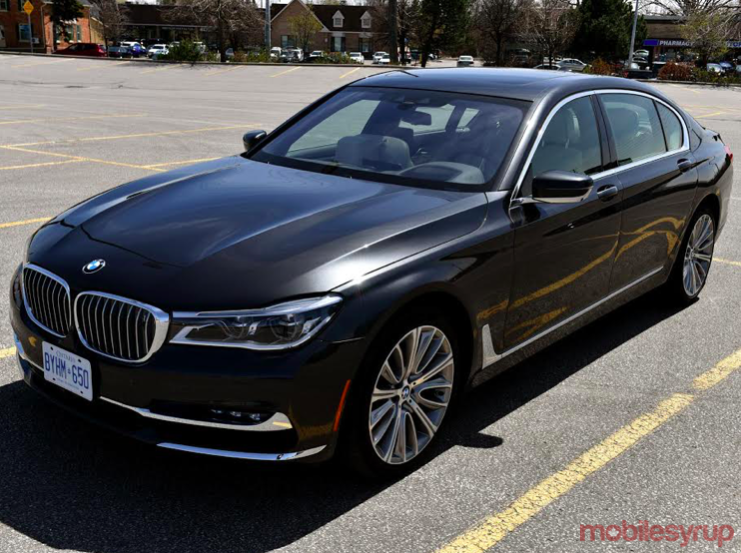 Luxury vehicles are meant to be trend-setters in a number of ways, and are typically the models automakers use to introduce cutting-edge technologies to the market. This is what BMW does with its 7 Series cars.

The 2016 7 Series is like a rolling experiment. There is so much technology packed into these particular vehicles that I couldn’t possibly cover it all in this article. Having driven a fully-loaded BMW 750Li xDrive sedan for close to a week, I came away both impressed and perplexed by the sheer volume of tech to work with.

The model I drove was the 750Li (long wheel base), a car with plenty of luxury and comfort. For a company that has shown some restraint in pushing the infotainment envelope the last few years, this car is a test case of the kind of features that could trickle down to other BMW lines in the near future. 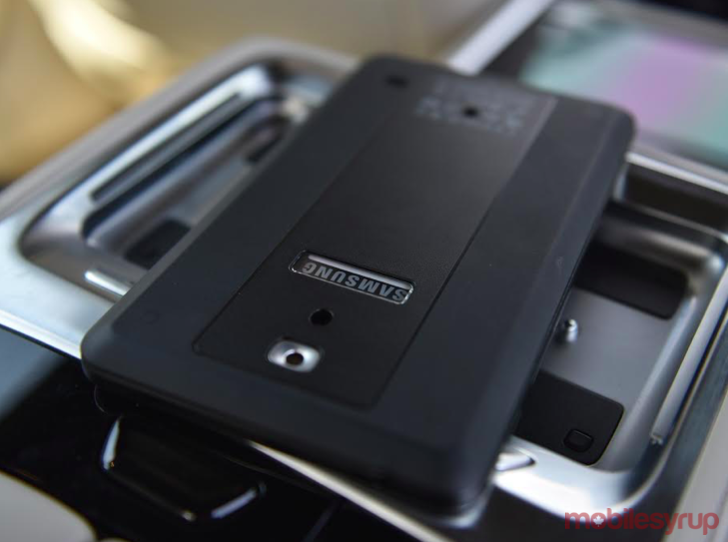 That’s only scratching the surface. The level of options and sophistication is substantial, and as it should be, given the $140,000 price tag. That’s too rich for most people’s blood, but what works well here is likely to work well in vehicles that are half the price or less. At least that’s the prevailing wisdom.

Many of the same staples form the core of the whole iDrive system, which encompasses ConnectedDrive, the Internet and smartphone components. Despite a touchscreen being included, the rotary dial with shortcut buttons flanking it is still a primary method to navigating the interface. There’s no CarPlay or Android Auto, but there is support for Siri and BlackBerry Assistant (not Google Now or Cortana). Spotify integration is now joined by other key apps, like TuneIn, Stitcher and Yelp, among others. 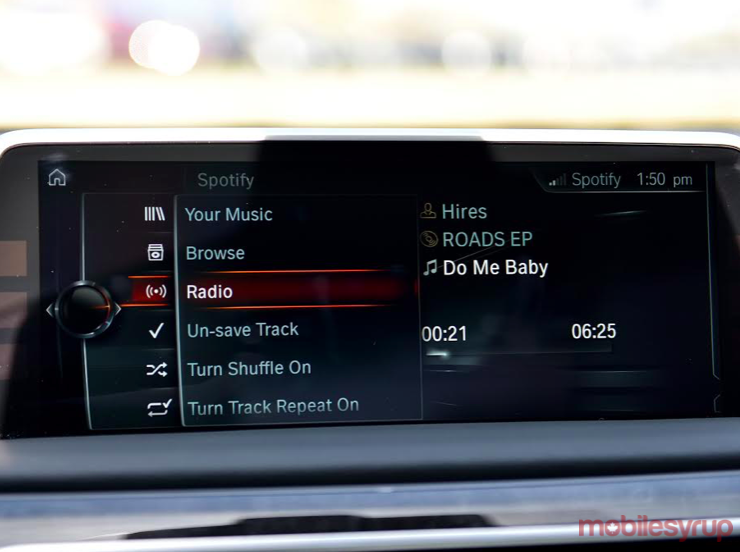 The new-look interface is cleaner, more refined and uses better visuals — an obvious upgrade from what BMW featured previously. Even the iDrive app support is meant to be better, making it easier to push directions to the car’s map before even getting in.

The whole setup goes further because of the clientele the car is designed to attract. Take, for example, the “executive seating” in the back where the front passenger seat rolls all the way forward, lowers a footrest from behind and gives the backseat passenger more than ample legroom — with a small pullout desk from the back centre console to be productive on the road. The fact the “executive” could also control almost all of the infotainment system from the Samsung tablet nestled in that console makes it all the more interesting.

That’s not even getting into the other entertainment options that are possible here. There was more than enough to get to, and that’s why this review will be updated in June when I get another test run with the short wheel base version. 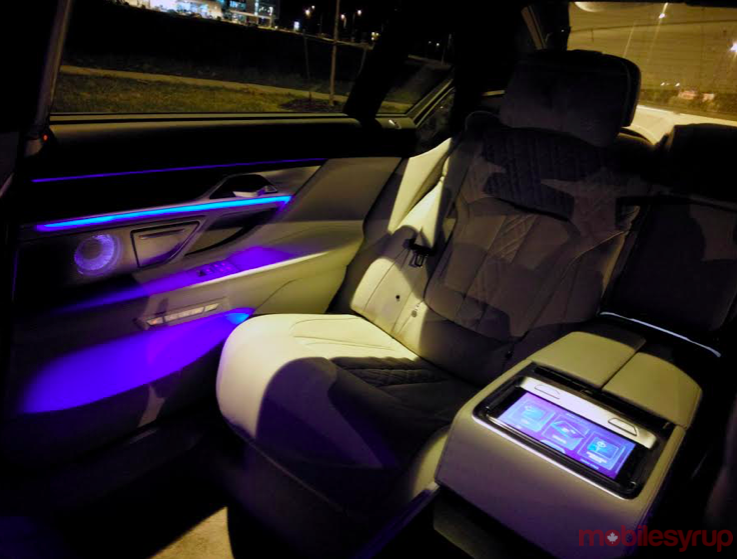 BMW has long had SIM cards embedded in its vehicles, except their purpose was singularly focused on facilitating the concierge and app services the company offers. Now, it’s opened up as an in-car Wi-Fi hotspot. The way it works is virtually no different than how competitors, like Ford and GM, have done it. It’s 3GB to start off for three months, whichever expires first, with prepaid data plans for purchase afterward.

One of the reasons for the familiar start and pricing model is because AT&T is the carrier partner. As in those other cases, the American telecom delivers the data, both in Canada and the U.S., negating any roaming charges, and latching on to whichever of Canada’s Big 3’s networks is strongest in any particular locale. Up to 10 devices can connect at the same time, and the Samsung tablet is already one of them.

The tablet itself is actually a 7-inch Galaxy Tab 4 running on Android 4.4.2 KitKat. Since BMW’s software runs on top of Android, I inquired about the update path to Lollipop or Marshmallow, and was told that Samsung is largely in charge of that. Not a good omen, given that the consumer model got the upgrade to Lollipop last summer. BMW figures that users would have their own tablets anyway, which is a fair assessment, but the fact the Tab 4 runs on a version of Android that is almost two years old is a little unsettling.

That said, the tablet’s inclusion is still a win for BMW because it’s a unique case of a third-party device that integrates fully into an infotainment system. Using it, I could adjust seating for all but the driver’s seat, adjust climate, search for a navigation point of interest, control music and switch lighting inside to my preference. I could even switch what each rear screen was displaying, so that the navigation map could be on one, while a video played on the other, for example. 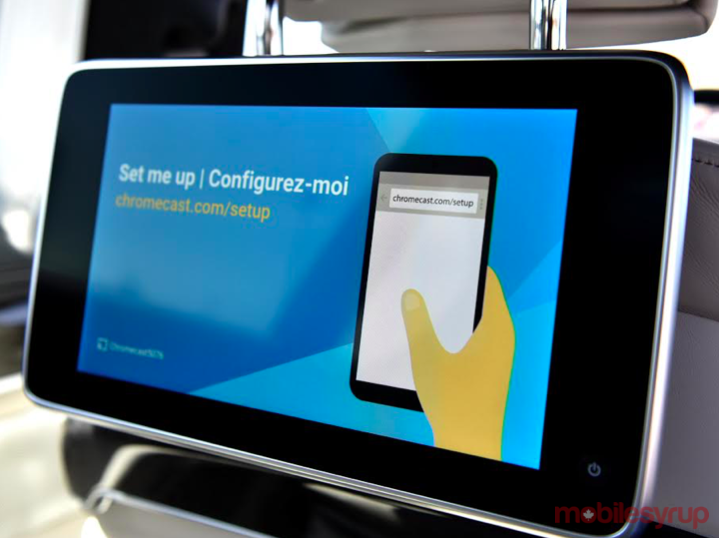 If it could be fully modular — like a different 7-inch tablet a few years down the line — then we’d be talking about something even more innovative.

That’s not likely to be the case, though, because the Tab 4 has its own compartment in the console, complete with a protruding microUSB plug that slides in when putting it in. Pressing the release button lifts up the one side to take it out, yet it’s fully operational when locked in place, too. It’s a slick setup, and a great idea. BMW and Samsung worked together to modify the back of the unit to give it a thicker form factor that would make it fit, and wisely chose to keep access to its microSD card slot open.

The car has no shortage of connectivity, otherwise. The standard USB port at the front is for smartphones, tapping in to the system automatically. The cool part is that this same integration is now also possible through the wireless charging dock in the front centre console or via Bluetooth. In the past, BMW required a wired connection for certain ConnectedDrive features and app compatibility to work. That’s no longer the case with the 2016 7 Series.

The in-car Wi-Fi also figures prominently here, particularly in the case where a Chromecast can be used inside. The back console has a DVD/CD deck with USB and HDMI ports, by plugging a Chromecast into both and connecting it to the car’s Wi-Fi network, it’s possible to push content from a phone or tablet to the two rear screens situated behind the front seats. I wasn’t able to get it working because the Chromecast couldn’t connect to the network for reasons I wasn’t able to troubleshoot. I will take another stab at it during the next test drive. 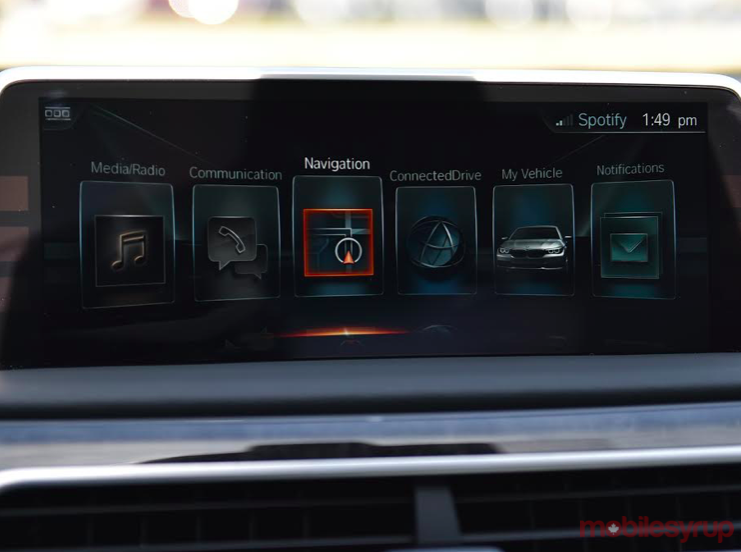 BMW was the first automaker to integrate Spotify into its infotainment system, and that continues on here, albeit with the ability to now launch it directly from the voice control on the steering wheel instead of having to select it manually. The integration also works via Bluetooth, per the increased compatibility noted above, providing access to playlists, radio, songs and albums that you’ve saved on your account.

The ConnectedDrive app used as the go-between for this arrangement needed to be downloaded onto my phone, which is fine, save for some confusion over which app to use. BMW launched a new version called ConnectedDrive North America that was meant to replace the Classic version, yet has only been optimized to work in the U.S. Canada hasn’t been included yet, and as of this review, the app has been pulled from the Canadian App Store and Google Play.

Despite that, the legacy experience isn’t bad. Stitcher, TuneIn, iHeartRadio, Yelp and other apps are now integrated the way Spotify is, meaning that they were recognized once my device was connected. I could launch them by voice, but couldn’t navigate through them (except for Yelp) that way. Yelp’s integration is nice, though could use some work to be more seamless. It’s possible to use its search and recommendations when seeking a point of interest on the navigation map. It’s nice, except it requires diving into menu after menu, making it less satisfying to use while driving. It was better while parked or stopped. 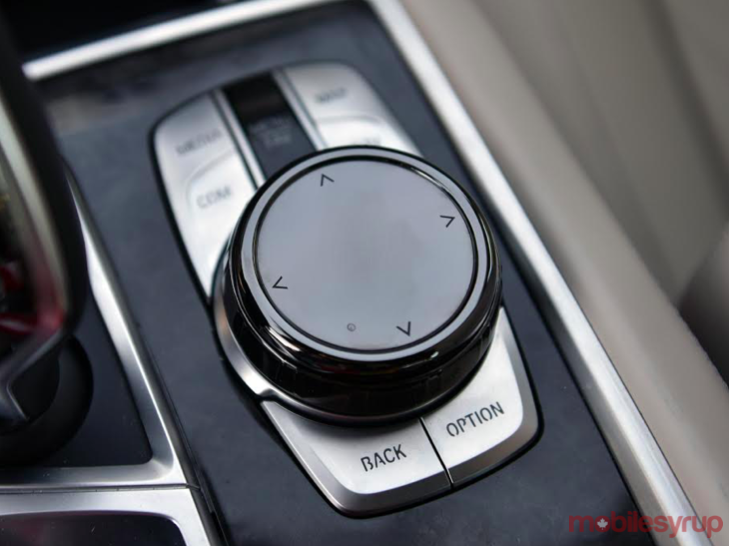 The Classic version of ConnectedDrive has access to web radio and other features that the new North America version apparently doesn’t. Having not been able to test it out, I can’t relate the experience between them, but it is something BMW drivers have noted in forums online.

Siri integration is exactly the same as it was before, with a long press of the steering wheel voice button triggering it. Same with BlackBerry Assistant. Google Now is a no-go, however, though Samsung’s S Voice does appear to work like it used to. BMW claims it improved its own voice activation platform to improve recognition, and while I found that to be mostly true, mistakes were still evident.

Technically, this car is optimized and ready for CarPlay and Android Auto, only BMW has yet to make it happen. There is a hesitancy in the company to pull the trigger for reasons that clearly aren’t known to the public, and I would hesitate to suggest that the 2016 7 Series models will even get it at all. That would seem like a cruel and petty thing to do to owners who have dished out that much money to ride in a car like this, but it’s perhaps another example of an automaker resisting giving up part of its dashboard for as long as possible.

This has somewhat adverse effects for Android users — ironic when a Tab 4 is nestled in the back. The lack of Google Now access becomes an issue when needing to respond to a text message or do a search. The ConnectedDrive app on Android is also woefully underserved, stifling any real chance to offset some of what’s missing. I’m not sure if the new North America version remedies any of that, either. 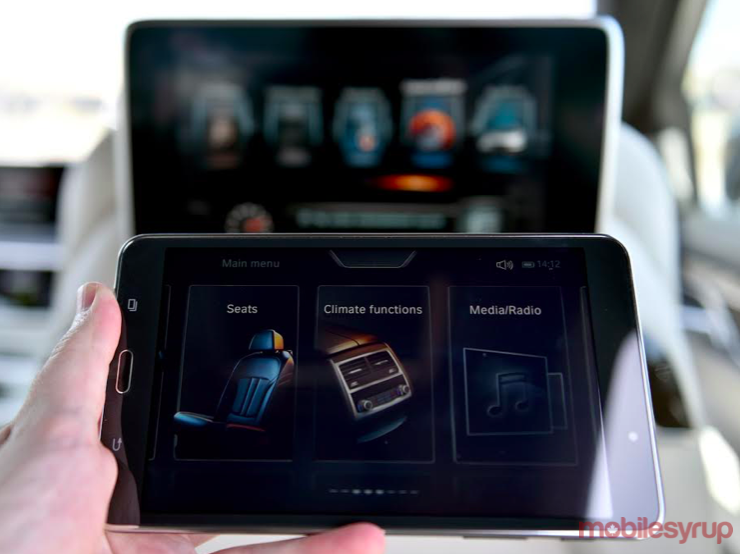 Without question, the 2016 7 Series has to be one of the most connected cars available. The depth offered here — even with CarPlay and Android Auto missing — was impressive. So much so, that I wasn’t able to get to it all, like the gesture controls, for instance.

After years of baby steps and relative stagnation with ConnectedDrive, the ideas formulated here make better use of current mobile technology. How the 2016 750Li might fare a few years from now is another question. It’s the same conundrum the whole auto industry continues to face anyway, so BMW is not alone. For anyone who can afford  the high price to ride in one of these regularly, the technology is certainly convenient. For everyone else, this car is a vision of what could be coming soon.