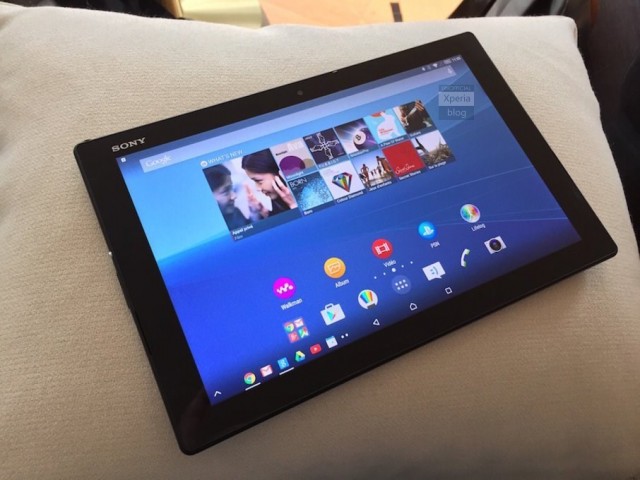 The steady stream of Xperia leaks continues. We’ve enjoyed two sightings of what is believed to be the Z4 Tablet in as many days and today brings yet another photo of Sony’s upcoming tablet as well as a glimpse of an unannounced Xperia phone.

The Xperia Blog cites French-language site Europe1.fr as the source for these images, and says it can say with 100% certainty that the phone pictured is the M4 Aqua. The tablet is presumably the same on Sony talked about yesterday and is thought to be the Xperia Z4 Tablet.

The M4 Aqua is the sequel to last year’s M2 Aqua, which was itself a waterproof version of the mid-range Xperia M2. Now, we haven’t seen an Xperia M4, and we likely won’t if the company is debuting the M4 Aqua at MWC. Realistically, if the devices are the same save for water proofing, the Aqua is a more appealing device anyway.

The M4 Aqua is rumoured to pack Qualcomm’s Snapdragon 615 SoC as well as a 5.2-inch 720p display, a 13MP camera, and a 5MP camera up front. The Xperia Z4 tablet is thought to be a 10-inch device with a 4K display. It will reportedly be thinner than the 6.4mm thick Xperia Z3 Tablet Compact and the Xperia Z2 Tablet.

Sony has teased the tablet for a March 2nd unveiling, so we should know all about these two on Monday.