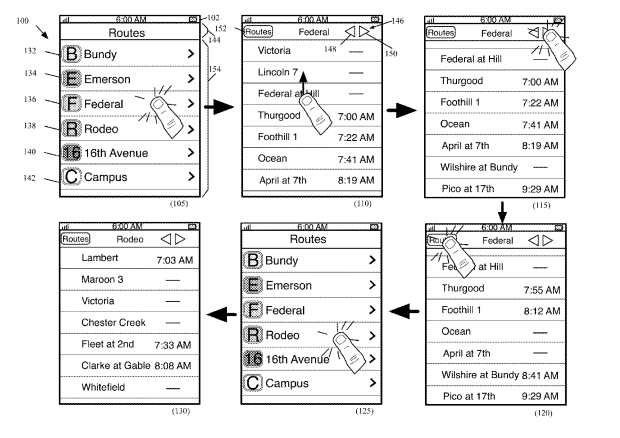 Apple was rumoured to be adding public transit directions to its Maps application earlier this year. Reports indicated that iOS 8 would include an update for Maps that would allow for directions via transit.

Unfortunately, WWDC came and went without any indication of such a feature. The rumour was that none of the planned updates for Maps were ready in time for the iOS 8 release. However, all may not be lost. A new patent filing from Apple suggests that the company is still working hard on expanding Maps’ functionality beyond the current support for directions via walking or driving.

Dubbed User Interface Tools for Commute Assistant, this patent was filed last year. It describes an app that would return multiple choices for routes between two locations using public transit, as well an automatically updated list of scheduled stops along each route. Arrival times, status updates for stops, the ability to save stops or routes, and the ability to view routes across all forms of transit serving your destination are also included, as well as the ability to select a specific stop on your route and view all of the other routes that also serve that stop.

Though the filing doesn’t specifically say this technology is for integration with Maps, this kind of assistant would fit right in with Apple’s own mapping solution. It also just wouldn’t make sense for Apple to release a standalone app solely for transit directions (though apps like that do exist for iPhone).

Apple went on something of a maps shopping spree last year, acquiring WiFiSlam, Canada’s own Locationary, HopStop.com, Embark, and BroadMap in the space of about six months. The financials for most of these deals are unavailable (all we know is that it spent $20 million on WiFiSlam), but the fact that Apple was willing to invest so aggressively in mapping is encouraging for iPhone users. Sadly, we might have to wait for iOS 9 before we see support for transit directions on Maps.