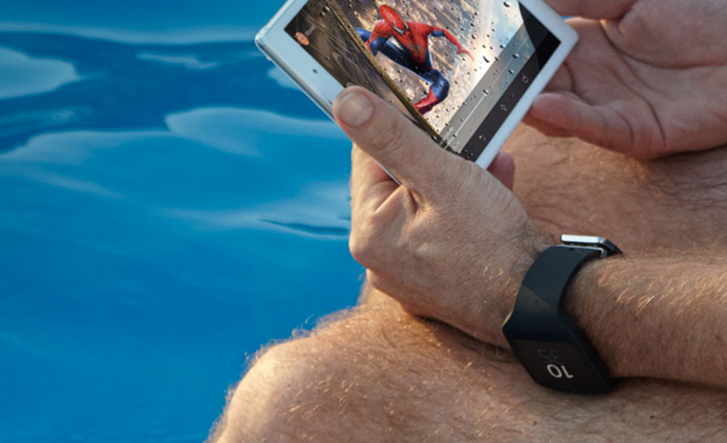 Sony’s IFA press conference kicks off at 4:15pm ET on September 3, but an ad from the company may have given us a sneak peek at what we can expect on the day. The pic comes from Sony’s own Facebook page, where the company was talking up the versatility and functionality of its SmartBand accessory. While the majority of the photos feature Sony’s SmartBand, one image contained what appears to be an unannounced Sony smartwatch as well as a new Xperia tablet.

The picture (which has since been pulled) doesn’t give a whole lot away. No doubt it was used “by accident,” since the accompanying text still refers to the SmartBand and doesn’t mention the tablet in the image at all. However, from the setting in the picture, we can infer that the smartwatch and tablet that we see are likely waterproof.

The tablet in the image is rumoured to be Sony’s new Xperia Z3 Tablet Compact, which broke cover last week in a user guide for a Sony Bluetooth speaker. The Xperia Z3 Tabet Compact is thought to be an 8-inch device with an HD display. We speculated last week that it may also have a Snapdragon 801 chip, 3GB of RAM and 16GB of internal storage. It’s also thought to carry an IP58 ingress protection marking, which translates to dust protection with waterproofing against immersion beyond one meter in depth.