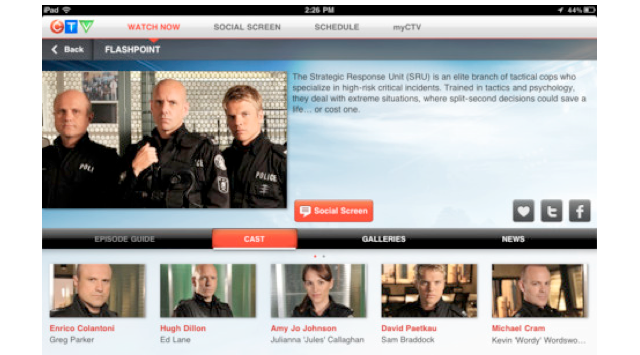 CTV – owned 100% by Bell – has just pushed out their iPad app. The basic features allow you to watch on-demand streaming of CTV shows, view photos, see TV schedules and watch trailers, but they’ve added a slight twist. Bell says that “During select live broadcasts” you’ll be able to “get interactive with CTV Social Screen”. Cool idea and good to see them embracing social media, making the app more than just watching TV. Here’s what it’s all about, claiming a first in Canadian broadcasting, CTV is allowing viewers to experience a “curated chat environment that includes tweets from cast members, Facebook comments and other insider and public commentary from across the social web, acting as a companion during primetime television shows”. There’s currently no complete list of what shows are included that have this social feature, but a red “Social Screen” icon will pop up if it is. The app is free to download.

Get it here via iTunes
Via: Bell