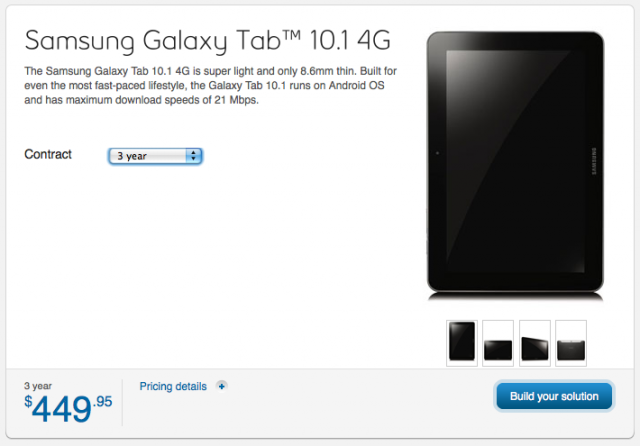 Today you have a vast choice of where you can pick up the Samsung Galaxy Tab 10.1 4G. TELUS released this tablet yesterday for $649.99, but it was quickly put back to “coming soon” for some reason. In a press release this Android 3.1 tablet became available at a few other carriers: Bell, Rogers, Virgin Mobile and Sasktel. Pricing so far has this on Bell on a 3-year term for $449.95 and we’re told $599.95. The other carriers have not updated their sites yet with pricing.

Highlighted specs are that this has a 10.1-inch display with a 1280 x 800 resolution, 1GHz dual core processor, 3 megapixel rear-facing camera with a 2 megapixel front-facing camera, HSPA+ 21Mbps and Wi-Fi, weighs in at 565 grams and is only 8.6mm thin.