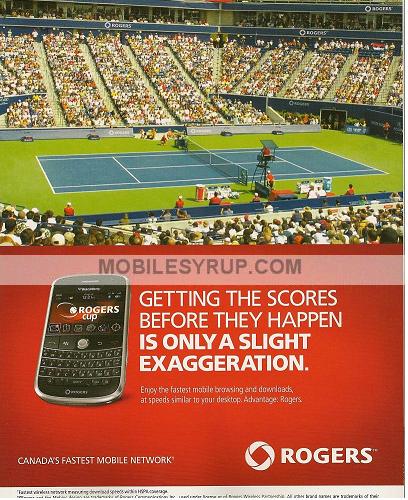 Seems the BlackBerry Bold is making its way around – this gem has been spotted being used by Lindsay Lohan, John Mayer and now at the Rogers Cup in Toronto. With the potential release date this Friday, the Bold is proudly displayed for all eager tennis enthusiasts to touch and be educated on.

In addition to the booth, while in attendance we noticed back of the Rogers Cup Program that the Bold is being advertised with the heading “Getting the scores before they happen is only a slight exaggeration.”

Our initial thinking is that July 25th seems like a promising release date as the Rogers Cup ends on Sunday, July 27. Why else would they be promoting live scores on a devise that is not going to be released??  However we are getting insider tips of an August 4th release.