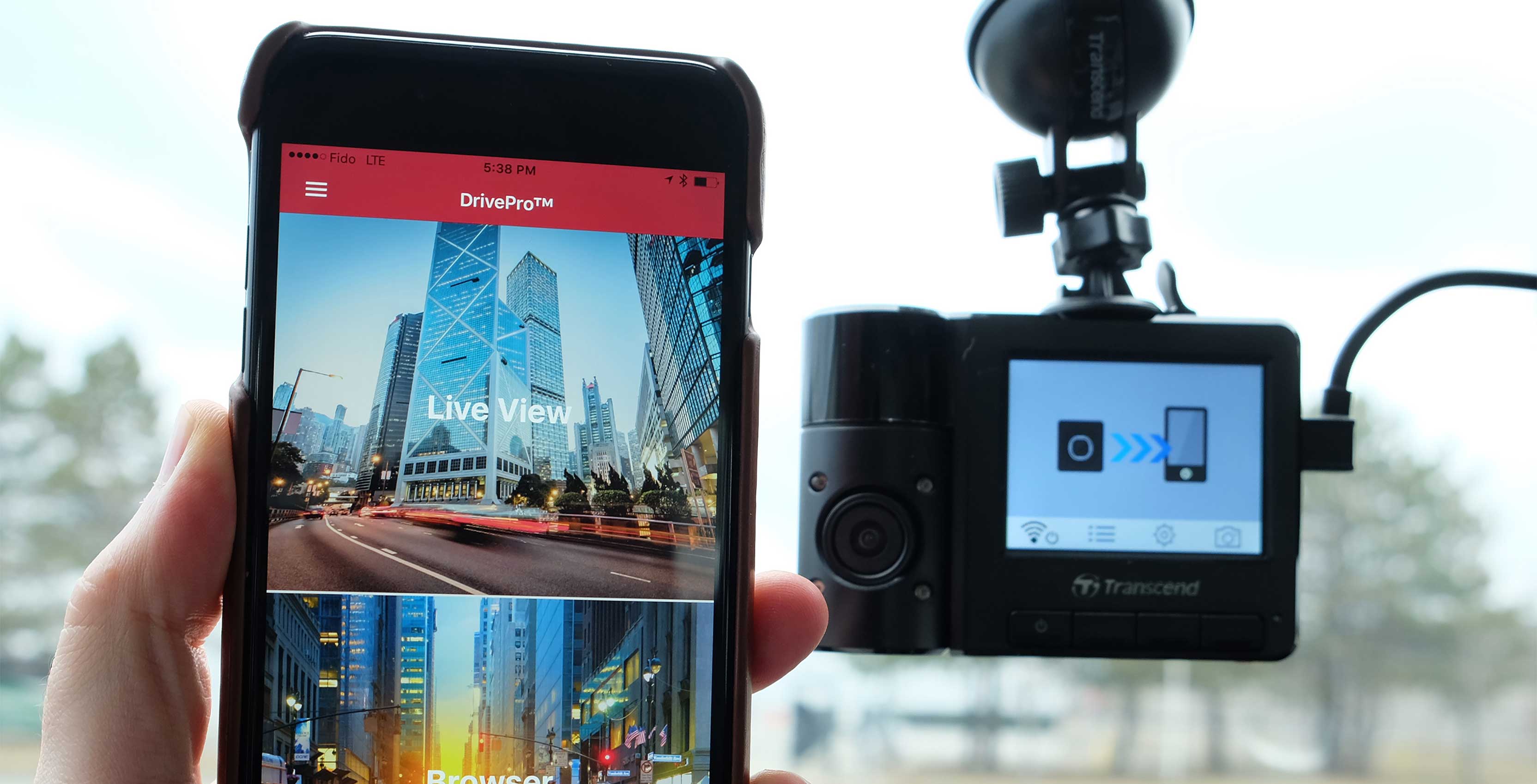 A dash cam is one of those automotive accessories you may not necessarily want, but would be glad to have in case something happens. Pairing it with an app adds a mobile component that feels different.

Dash cams can be regarded as a form of insurance insofar as they capture what exactly happens on the road ahead. They have become seemingly ubiquitous in Russia for the insurance fraud that apparently runs rampant in that country. Sometimes, they also capture remarkable footage, like the various meteor explosions and sightings that have occurred over Russia in the last few years.

In Canada’s more serene driving conditions (save for the odd storm), a dash cam could prove instrumental in capturing a collision or fender bender live to prove who was at fault. It doesn’t hurt that it’s also a convenient way to shoot footage of whatever beautiful landscapes lying before it. Not to mention all the taxi and ride-sharing drivers concerned about their own personal safety.

Transcend’s DrivePro 520 is a dash cam that packs in an interesting feature set, including two cameras and a companion app for iOS and Android that tries to cover more ground than just the road ahead. 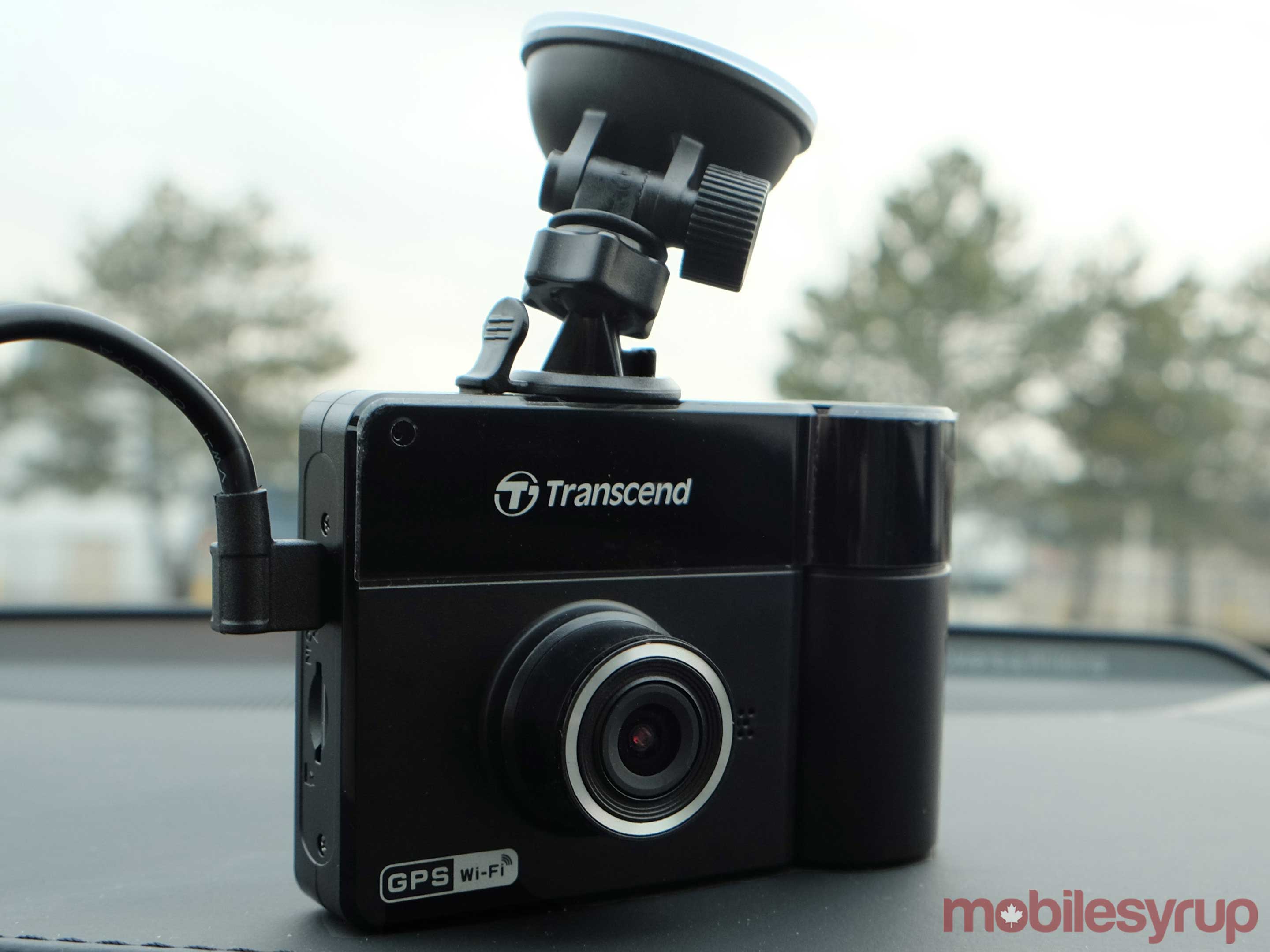 The DrivePro 520 has two lenses, one facing forward with a 130-degree wide-angle, and another that rotates 180-degrees to look inward toward the cabin of the vehicle. The front-facing camera records in 1080p HD. The rear shoots in 720p at 110-degrees and has four infrared (IR) LEDs surrounding it to capture footage at night too.

The 2.4-inch LCD screen displays both views at once picture-in-picture, with the rear camera view occupying the left-hand corner, though the settings presents options to isolate one camera or turn them off completely.

Built-in GPS and Wi-Fi maintains location data, part of which is embedded in the mount. A motion G-sensor detects impact to ensure whatever is recorded at that time isn’t overwritten. A 32GB microSD card comes in the box, which is more than enough for what this does, with the slot situated on the right side under the mini-USB power port. Mini-USB sightings aren’t too common anymore, but that’s what this uses. 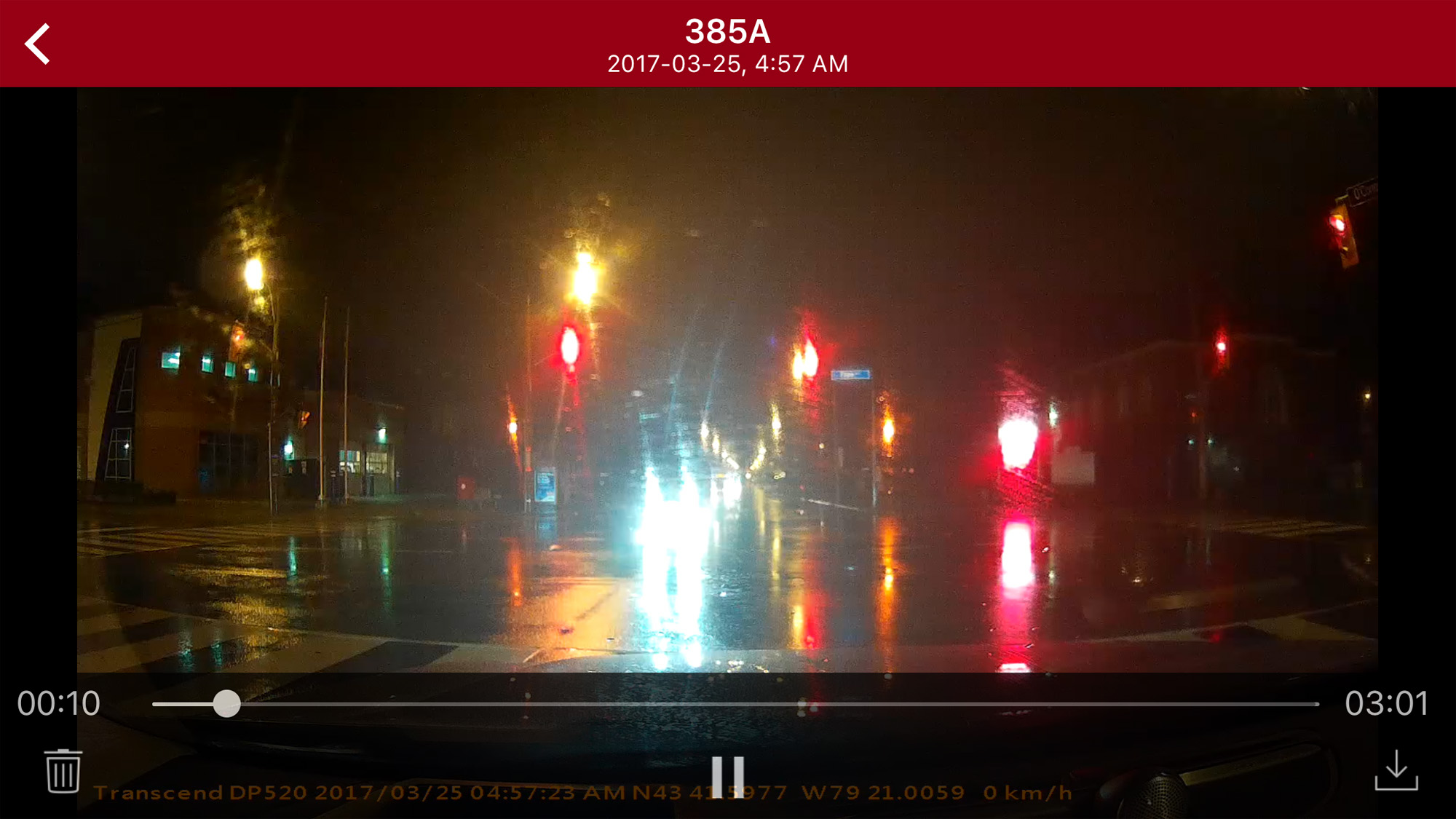 Buttons align under the LCD for power and navigation or to snap a still photo on demand. Packing all this in makes the overall size of the DrivePro 520 larger than a typical dash cam is, which is why unobstructed placement isn’t always easy. Older vehicles tend to have more space behind the rearview mirror, whereas newer ones might not because of whatever features are crammed into the area in and around there.

Either way, the suction cup and swivel presents plenty of maneuverability on where to put it. The free DrivePro app for iOS and Android isn’t required to set up the unit, but the features within it do make it worth using when the need strikes.

The big challenge, at least to me, is what to do with the long cable. It needs to plug into the vehicle’s 12V socket, and keeping the cable out of sight basically forces snaking it under the panels to make it happen. It’s somewhat invasive when you think about it, but not unlike any other aftermarket gadget that has to be installed with cabling. 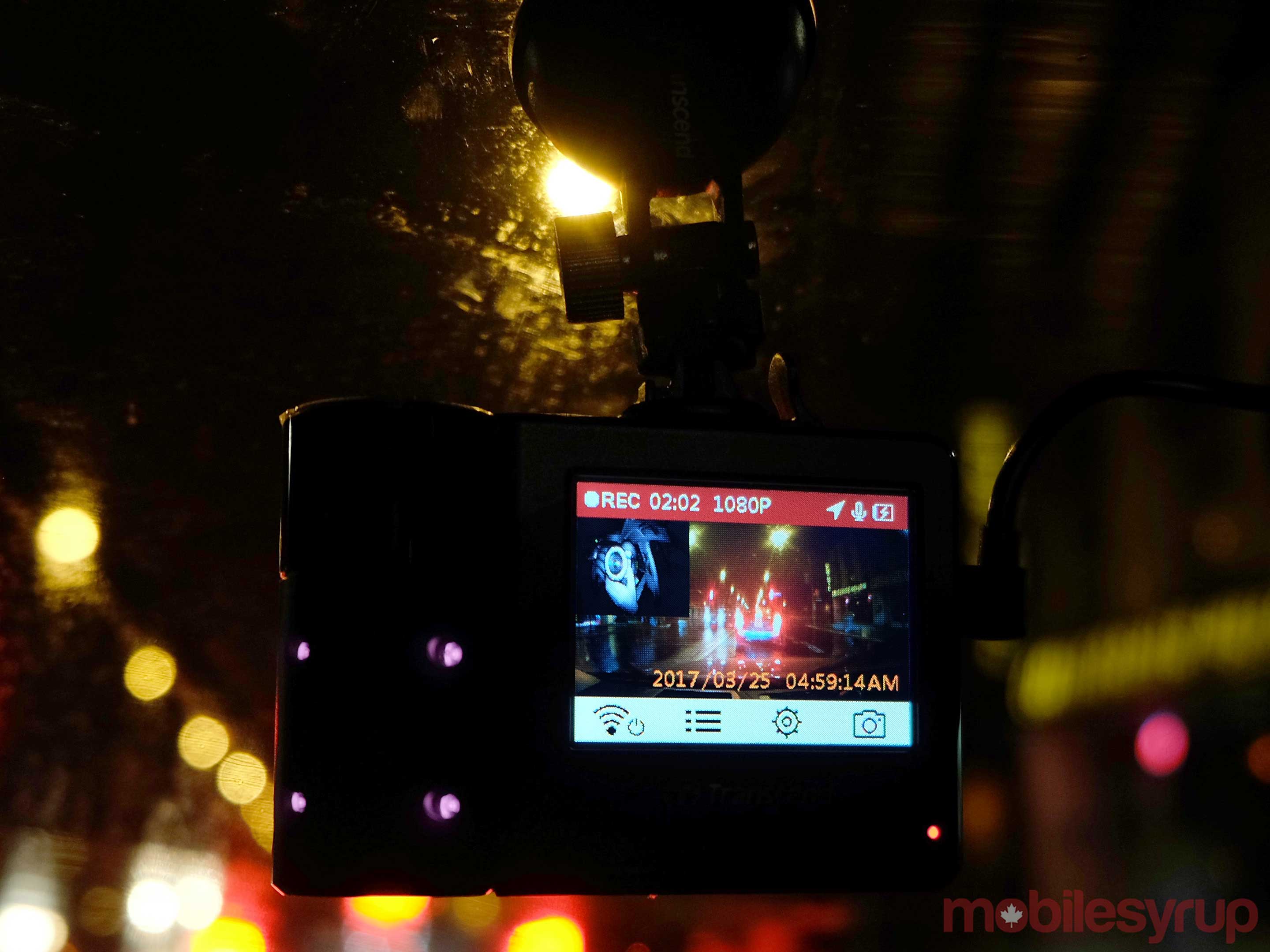 Unlike the rear camera’s swivel, the forward camera doesn’t adjust without swivelling the whole unit right, left, up or down. It shoots at a pretty wide angle, so I found it was usually fine after the initial setup, especially after angling it properly.

Connecting to the unit’s network via Wi-Fi Direct is required to view recorded video and download it to the phone. Recordings from the respective cameras are saved separately, but not in different sections, so the obvious giveaway for me was seeing thumbnails looking out the windshield and others of me in the driver’s seat. Transcend smartly breaks up video into segments so as to avoid having monstrous file sizes that would take forever to download.

Most settings are readily available through the settings menu on the unit itself, but the app makes it infinitely easier to make adjustments all at once, especially from the outset. It’s possible to lower the interval for saving video, thereby creating more files, but at a smaller size. The default resolution is 1080p for the forward camera, but I could knock that down to 720p, or do the same to the rear one. Even exposure control is an option. I could turn the microphone off to keep conversations or music out of the mix. I could remove the video stamp or delay the unit powering off after cutting the engine. I could even adjust the sensitivity of the G-sensor. 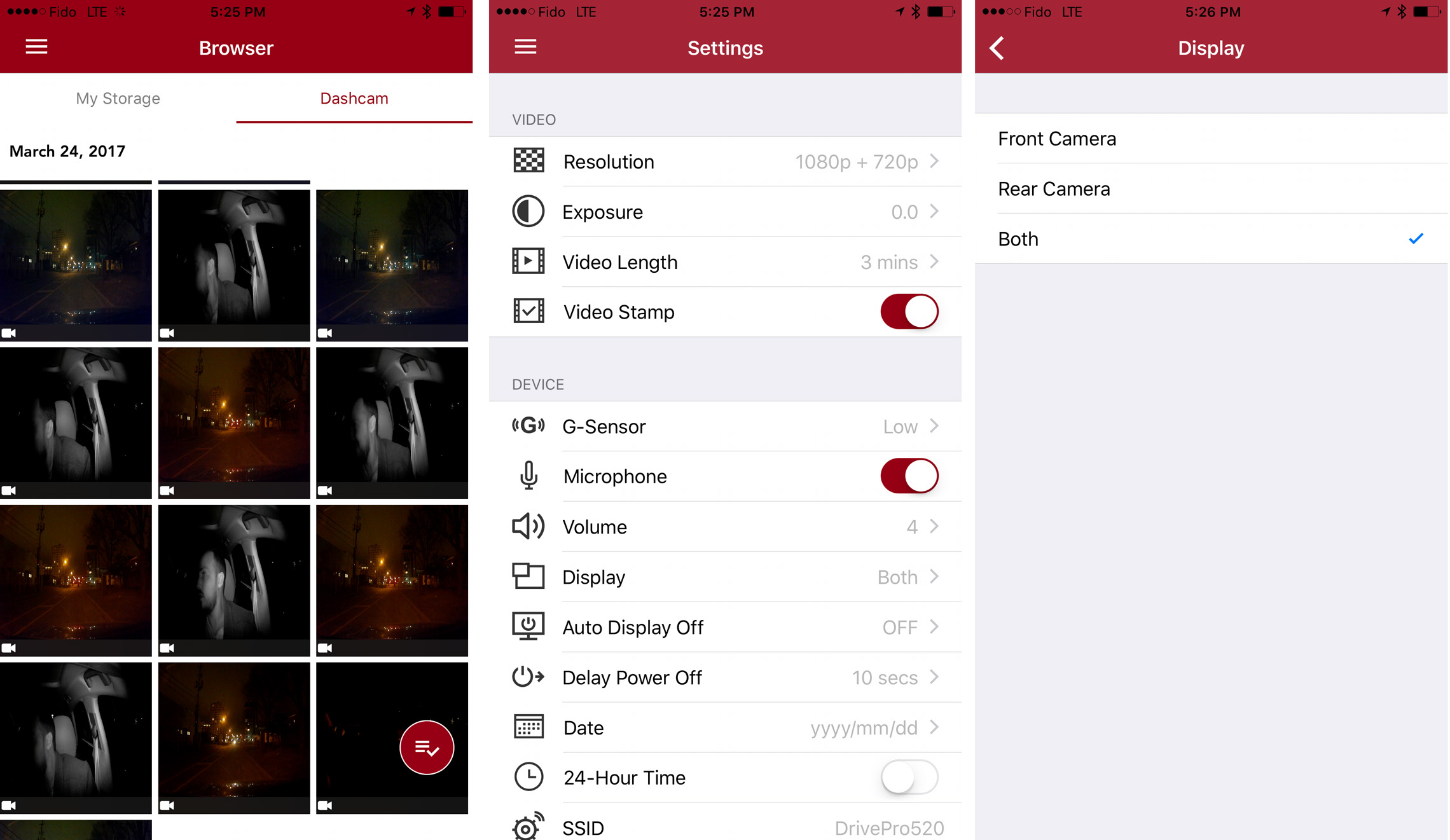 Getting a live view from the camera onto the phone is simple, albeit with some lag that puts it a few seconds behind. The DrivePro 520’s Wi-Fi chip also doesn’t seem to be as robust as it should be. I experienced stuttering and pixilation often when trying to do it, so it wasn’t a feature I made much use of.

After a few days of varying conditions — day and night, sunny and overcast, dry and rainy — it became apparent why some of the settings are there to tweak. The forward camera naturally has a wider-angle lens with a fisheye effect on the fringes. Detailed sharpness tends to be more noticeable in the centre, and less so on the edges. Sunny conditions produce solid colours and sharpness, whereas overcast comes off as more muted and dull. At night, the footage isn’t too bad, but clearly, the aperture isn’t super wide and it didn’t look like optical image stabilization was in play here.

The good news is that the details that matter are evident. Licence plates are legible. Makes and models are pretty clear to those who would recognize them. Street signs and other landmarks don’t show up as blotches.

What was particularly surprising was how much audio the microphone was picking up. Conversations were clear, with even backseat passengers audible. Music playing in the cabin came in nicely too. For drivers who care equally about what the camera captures inside, the strength of the mic is a nice complement to the video side..

All eyes on you

I should note the disparity between the iOS and Android apps. At the time of this review, the “New” version of the app was only available in the App Store. The one on Google Play was still the previous one, which also happens to still be available on iOS too. Transcend is likely updating it sometime soon, but no definitive date has been confirmed.

The app integration is neat from a management point of view. Otherwise, the live view streaming setup isn’t consistently good enough to warrant much acclaim.

The DrivePro 520 is also pretty widely available in Canada, with various online retailers, including Amazon, Newegg and NCIX. Best Buy and Walmart also stock it, though only seem to sell it online. At $260, it’s somewhat pricey, but a worthy investment as a safety device. Even more so if your auto insurance company is willing to drop your premium a little for having one.