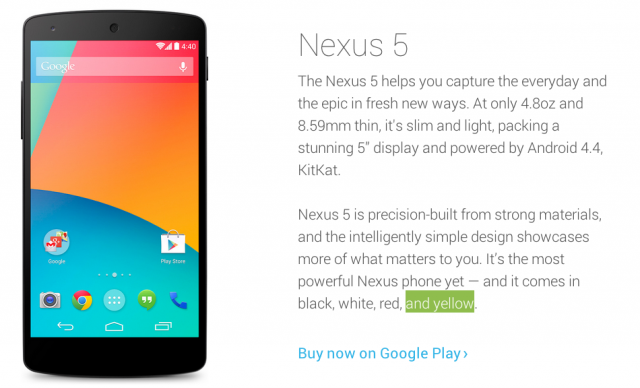 The Google Nexus 5 is currently available in several colours, including black, white and red. There has been rumours floating around the web that we might eventually see a yellow version of the pure Android device arrive, but nothing has appeared.

Today, while Google I/O developer conference is in progression, Google updated its main Nexus 5 listings to show that the N5 “comes in black, white, red, and yellow.” Unfortunately, the link to purchase does not give an option to do so. Perhaps someone at Google is a bit eager… hopefully “the most powerful Nexus phone” shows up soon and Canadians will be able to buy it directly from Google Play.

Google and HTC rumoured to partner for 8-inch Nexus 8

Android 6.0 Marshmallow OTAs beginning to roll out to Nexus devices