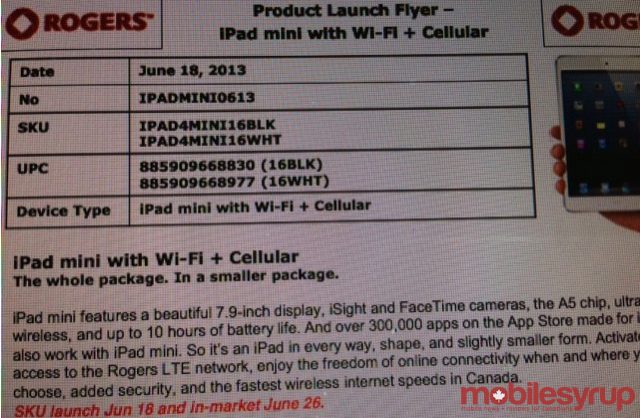 Last week we let you know that TELUS and Rogers would both be making the iPad with Retina display and iPad mini “in the coming weeks.” No dates were listed on either of the carrier sites, but we can now confirm that these tablets will be hitting Rogers stores on June 26th, presumably the same date on TELUS.

According to an internal doc we received it reveals the same pricing as visiting the Apple Store or Apple’s online store, but this move will help the carriers activate in-store rather than sending customers to another retailer. Rogers does note that customers who activate on their LTE network “enjoy the freedom of online connectivity when and where you choose, added security, and the fastest wireless internet speeds in Canada.”

Update: Rogers has sent out a text message to their customers stating the pending iPad’s availability, plus an offer. “Rogers msg: Limited time only – be among the first of our customers to get an iPad or iPad Mini on June 26th & save up to $100 (over 10 months) on select tablet plans!”