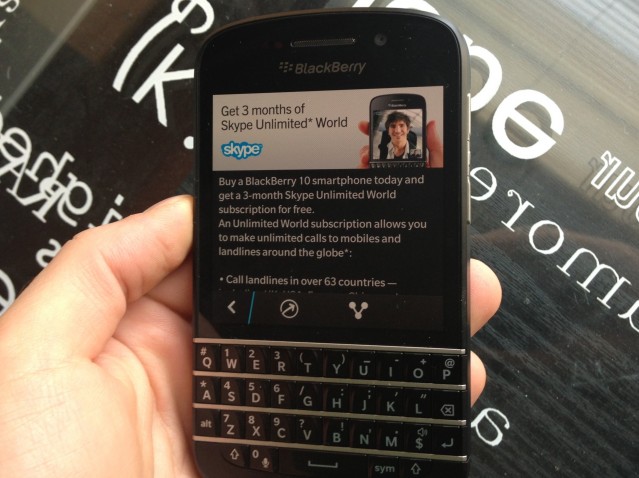 Skype is now available if you’re the lucky owner of a BlackBerry Q10. The problem is that the device doesn’t go on sale in Canada until May 1st, so it’s very unlikely you own one.

Nevertheless, there are a few users who can benefit from this news, and to go along with the announcement, Skype is offering three months of Skype Unlimited to all BlackBerry 10 users.

Skype for BlackBerry 10 is actually a port of an Android app, but it was built with the Q10’s form factor in mind. It also hooks into the requisite hardware for voice and video chats, so you’ll get all the benefits of a native app — all except performance. Android apps tend to start up slowly and run poorly compared to their native counterparts.

But because the port got special treatment from BlackBerry, it’s treated more like a native app than most Android adaptations. It runs in the background, even when not open in an active frame, and incoming calls pop up as if they were regular phone calls. Indeed, sound and video quality is excellent, too.

Skype will be available for the Z10 when the phone is updated to BlackBerry 10.1, likely in mid-May.