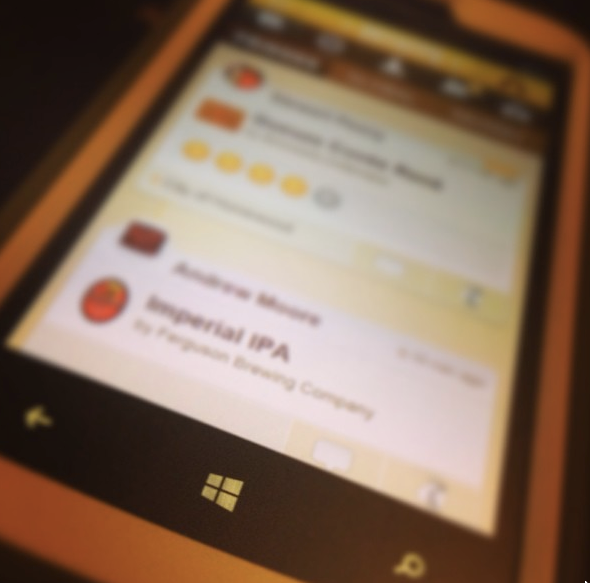 Microsoft’s platform will be the last of the four major mobile operating systems on which Untappd debuts. After launching as a universal HTML5 app for iOS and Android devices, it launched native versions in 2011, focusing on an easy check-in and discovery experience.

When BlackBerry 10 launched in early February, Untappd was right there on launch day fielding check-ins with a native app. The U.S.-based company was evidently enthused about the potential for BB10,  working closely with BlackBerry to get the app out in time for opening day.

Windows Phone, however, has been a bigger struggle for some developers. While Untappd promised an app was “coming soon,” the team, like most small dev shops, decided it was the least important to focus on. Despite indications of growing market share, doubling to 5% in some markets according to a recent report, Microsoft still attracts fewer apps than Android and iOS, by a large margin. With startups attempting to stay as lean as possible, adding a third or fourth operating system to build for and support may be untenable.

Nevertheless, Untappd for Windows Phone is coming soon, and that’s a good thing. On the other hand, popular music service Songza has set in motion the expectation that it too will soon come to Windows Phone.

The music service is coming soon to Windows 8, the big brother and alternate app store to Windows Phone, but a recent support request resulted in a tepid, if not encouraging, response:

“Thanks for writing in! We are currently working on a Windows 8 app and hope to work on a Windows 8 phone app shortly there after. Thanks so much for the interest and stay tuned for future updates.”

No promises, just more hope for a beleaguered user base waiting for mainstay apps like Instagram, Flipboard and more.