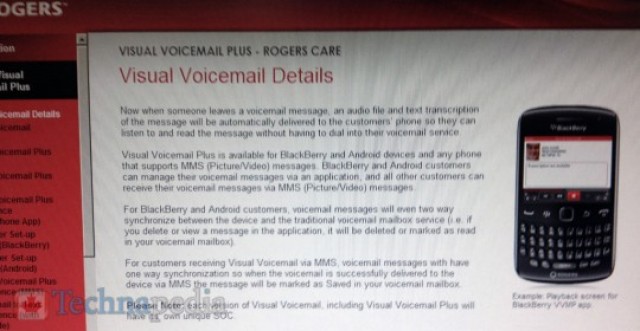 Rogers customers who have an iPhone have been using Visual Voicemail for a while now. Rather than dialling into your voicemail all the time, the service gives you the ability to listen (via audio file) or read (via text) the voice messages people leave on your device. New details have emerged that indicates Rogers will be expanding the service to BlackBerry and Android devices, plus any handset that supports picture messaging. The app is called “Visual Voicemail Plus” and is scheduled to be available in February – the main feature will give owners the option to save a voicemail message for an unlimited period of time. However, there are some limitations at launch – BlackBerry users who have the Bold 9700 and Torch 9800 will be the only supported devices. As for Android devices, the Sony Ericsson X10 and the Samsung Galaxy Q are the chosen ones.