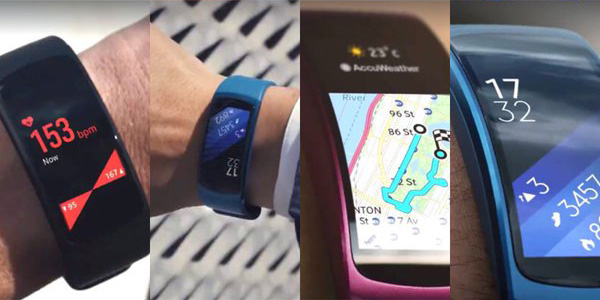 Following a leak from Samsung’s own website, a collage of promotional pictures of the Gear Fit 2 have surfaced online. The pictures confirm what a previously leaked render had shown: the rubberized smartwatch will come in pink, blue and black, and have a display flush with the wristband.

Currently, rumours are swirling that the forthcoming band will include a 1.84 inch Super AMOLED screen, 4 GB of internal memory, a built-in GPS and Samsung’s mobile health-specific Bio-Processor chip, which will facilitate enhanced fitness and health-tracking features. Many also believe that due to its rubberized appearance, it will be water resistant.

The Gear Fit 2 is expected to be unveiled this June.

Related reading: Samsung’s next smartwatch may also attach to your shirt