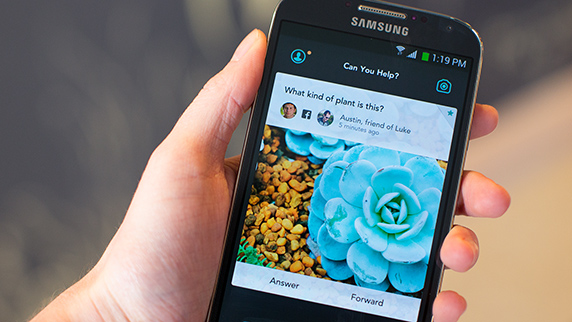 Twitter co-founder Biz Stone pulled back the curtain on his latest project today. Available now for iPhone and Android, the app, called Jelly, is designed to update the traditional desktop Google search for a more mobile and social world.

Operating as kind of a Twitter-length Quora, Jelly lets users pass out short questions to their Facebook and Twitter friends with photos attached for additional context (e.g. “is this safe to eat?”). Users can then respond with an answer and photo of their own.

Stone says that mining social graphs (and extended social graphs – think ‘I know a guy who knows a guy’) in this way will allow users to quickly gather knowledge rather than the often obtuse results provided by more traditional search engines, but as with most Q&A-focused services, success will be based on the quality of those willing to participate. So far every question in my extended social graph is from a snarky tech writer snarking about CES; Jelly must appeal to the less tech savvy but still socially connected if it wants to avoid becoming the graveyard of lost souls that is Yahoo Answers. The pedigree of the Jelly team and its investors (Twitter alumnus Ev Williams and Jack Dorsey, Al Gore, Bono!) leads me to believe they have a good shot at figuring it out.

The smallest 4G smartphone ever is available on Kickstarter

Microsoft to separate Cortana from search in upcoming Windows 10 update