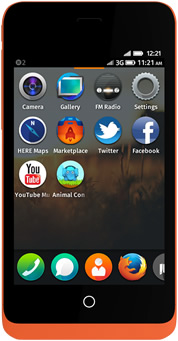 Mozilla has announced its first two developer phones on which to test its upcoming Firefox OS. While they’re not going to break any speed records, they will allow developers to create apps and games based on Mozilla’s mobile APIs as well as play around with the pre-installed software like the browser, gallery, media, camera, Twitter, Facebook and maps.

The developer phones, called Keon and Peak, are going to run software created with HTML5. According to an accompanying blog post, “HTML5 apps can do ‘phone things’ – they can make the phone vibrate, make a phone call or send a text message.” The company behind the product, Geeksphone, is not well known in North America but it is based out of Madrid, Spain, and we wouldn’t be surprised to see some hands-on videos with the Keon and Peak devices at Mobile World Congress.

The phones don’t have earth-shattering specs, but since the infrastructure of Firefox OS is based on web standards it doesn’t need much horsepower. The Keon is as follows:

The Peak is as follows:

Both devices will work on Canadian 3G at 1900Mhz but they lack the 850Mhz band necessary for true compatibility. These devices are being marketed for the European market, which will likely be more receptive to its charms than a North American market saturated with iOS and Android.

The beauty of Firefox OS is outlined in the accompanying blog post.

Why develop for Firefox OS?

– Keep the web open. Support the open web and help make sure the power of the web is available to everyone – even on mobile devices.
– Simplicity. Develop on a single technology stack (HTML5/CSS/JavaScript/new WebAPIs) and deliver across the web and devices.
– Freedom. You’re not locked in to a vendor-controlled ecosystem. You can distribute your app through the Firefox Marketplace, your own website, or any other store based on Mozilla’s open app store technology.