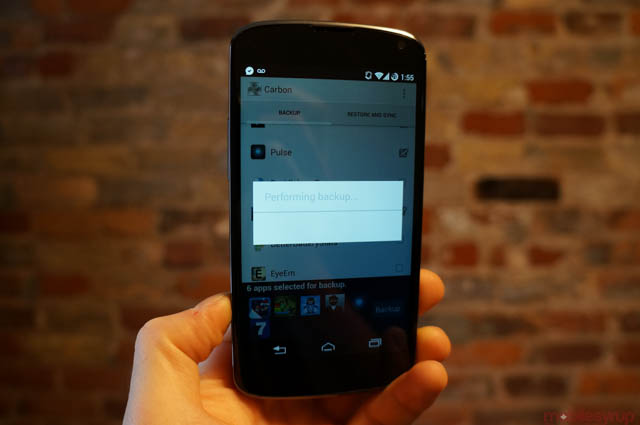 Noted ClockworkMOD developer, Koushik Dutta, has been relentless in his quest to improve the quality of the Android utilities, especially for root users. For ROM flashers, he made the incredibly-successful ROM Manager and associated ClockworkMOD custom recovery; for SMS to desktop fans, he wrote DeskSMS so users can see and reply to texts from a PC.

Over the weekend he announced Carbon, which is a working title for a backup app he’s been working on for some time. That it’s called Carbon is an inside joke for any in-the-know Android user fully aware that another app called Carbon was promised and never came to fruition. The idea before this Carbon is a simple, cloud-connected Titanium Backup of sorts. Users hook into Google Drive’s API and can backup and restore apps across devices over both 3G and WiFi. The apps themselves are stored on Google Drive but the sync data uses Google’s Cloud Messaging platform and a bit of Koush’s “automagic” flair.

The app has already proven incredibly useful, as I’ve been able to back up all the base app data from my Nexus 4 which I will later restore to my Nexus 10.

The developer plans to integrate Dropbox support as well as Box.net before it’s officially released, and he will bring a non-root version to the App Store which will use a computer as a go-between, though the details are scarce at the moment. Carbon is currently in beta and has a few bugs; the interface is also a bit clunky and the backup dialog boxes often crash or hang for long periods of time.