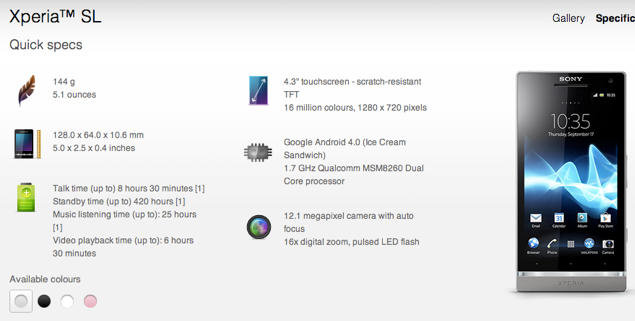 The Sony Xperia SL hasn’t exactly been a well-kept secret, but like the iterative arc s before it, the Xperia SL is a small speed bump from its predecessor, as well as an introduction of three new colours to the family.

It’s the same size, weight and design as the Xperia S so, like the iPhone 4 and 4S, you’d be hard-pressed to tell the two apart. Aside from being offered in silver, white and pink, the Xperia SL has a 1.7Ghz Qualcomm Snapdragon MSM8260 processor, the fastest speeds we’ve seen from this variant thus far, with an Adreno 220 GPU. Unfortunately this particular processor/GPU combination is getting quite old and has been since surpassed by Qualcomm’s own Krait-powered Snapdragon S4 family of SoCs. We’re not sure why Sony decided to keep every other aspect of the device the same, but we’re sure they have their reasons.

On a positive note, the Xperia SL ships with Android 4.0 Ice Cream Sandwich, and while we’d have liked to see it come with Jelly Bean, at least it’s ahead of the Sony curve on that one — the Xperia S is still languishing in Gingerbread land.

We don’t have word on whether the Xperia SL is coming to Canada, though Rogers has picked up the last five significantly Sony releases, including the Xperia Play, Xperia arc, Xperia arc s, Xperia S and Xperia ion. If it were to come to a Canadian carrier, we’d bet it would be through Big Red.