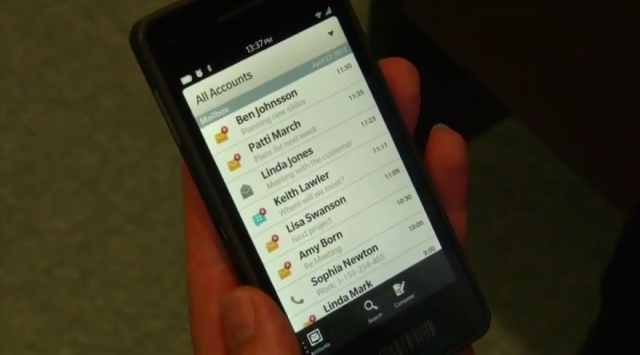 Though they will not necessarily come to market at the same juncture, the first two BlackBerry 10 devices will be announced at the same time, at some point later this year. This according to RIM CEO Thorsten Heins, who has traditionally been quite hesitant to talk release dates for the platform up ’til now.

In an interview with CrackBerry, Heins told them that they “own” the QWERTY market at the moment with the Bold 9900, so releasing a touchscreen device first is a way of eating into that BYOD (bring your own device) share loss they’ve taken in recent months. The hardware keyboard version will follow a few months later, as it hasn’t been worked on for nearly as long as the full-touch handset and BB10 is being adapted to work on the smaller screen.

Another interesting tidbit is what Heins says about carriers. He believes that due to RIM’s existing relationships with hundreds of carriers around the world, the launch of BB10 is poised to challenge what he calls the “Samsung/Apple duopoly,” something he says they do not like very much. RIM has always been willing to work with carriers to push custom apps or promotions, and has created a niche market for low-cost providers with the Curve series. Samsung and Apple are seen as exerting too much influence on carriers, which limits customization to the hardware and software.

The whole interview is very candid, and reveals a lot about this more focused, media-friendly version of RIM. Heins admits they he could have assented to release BB10 this year, but it wouldn’t have been the great product he knows it will be.

What do you think? Will it be the great product Thorsten Heins knows it will be?