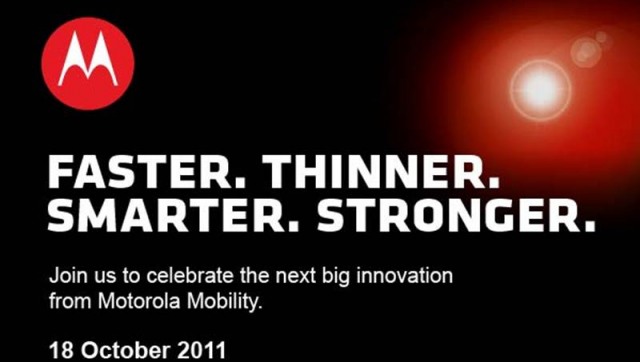 This coming Tuesday Motorola will be showing off their “next big innovation”, most likely it’s going to be the leaked Droid RAZR. Multiple sets of pictures have surfaced online and even their promo vid revealed several hints pointing to this truth. Moto boldly stated that there are “Four Reasons to Get Excited” and highlighted “Faster. Thinner. Smarter. Stronger”. Over the past few weeks the rumoured specs had the Droid RAZR coming with a dual-core processor with the capability of hitting 42Mbps download speeds. More rumours have surfaced online today, BGR notes from their sources that this newest Android will be “Thinner and faster than the iPhone 4S”, confirmed to have 1.2GHz dual-core processor, 4.3-inch qHD display, 1GB of RAM and 4G LTE (which would fit nicely into the Bell lineup).

Everything will go down on October 18th… if not before.
Source: BGR