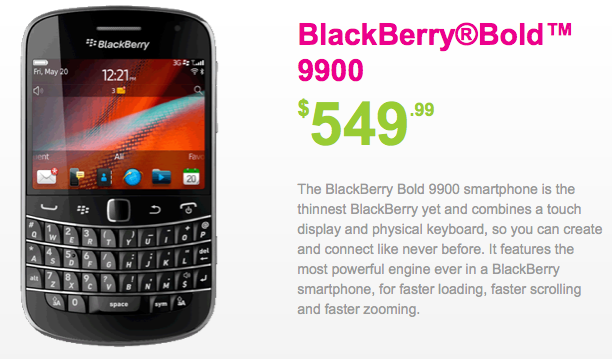 Mobilicity has come out and officially announced on Twitter that the new BlackBerry Bold 9900 is now available. Unfortunately nothing has showed up on their site, nor in stores. We’ve also reached out to Mobilicity for the no-contract price point, but this would be a stellar device to combine with the $25 talk, text and data plan (plus $5 for BES).

The Bold 9900 is hands down the best BlackBerry smartphone to date. This comes loaded with the new BlackBerry 7 OS, full QWERTY keyboard plus a 2.8-inch touchscreen display. In addition, this has a 1.2GHz single-core processor, Wi-Fi and a 5 megapixel camera that can shoot HD videos.

Update: We’ve been informed by a few Mobi tipsters that the Bold will be $549.99 outright, but still no Bold in stock??

Update #2: A press release was just sent out that says a new promo that gives “three free months of BlackBerry Internet Service (BIS) when they purchase the new BlackBerry Bold 9900 smartphone and activate on a monthly rate plan of $35 or higher”. Nothing yet online.

Update #3: It’s finally online, but no place to purchase yet. More here at Mobilicity

TELUS to release the BlackBerry Bold 9900 in White