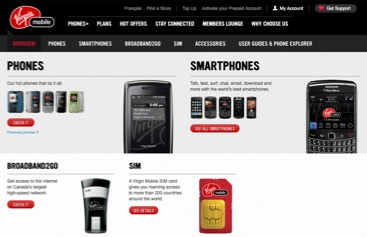 In what is turning out to be one of the most interesting launches of a “new network”, Virgin Mobile Canada has officially started to sell all their new devices. The reason we say it’s interesting is because we received an invite to attend the big launch party bash on Tuesday, February 2nd… which led us to believe the launch date was happening at that time. Plus a press release went out that boldly stated “On February 2, 2010, Virgin Mobile Canada will be unveiling a Secret. To officially announce the turning on of the new HSPA+ network and a host of sexy new phones and services”.

Maybe they just wanted to get a good start with the weekend shopper/student crowd. Regardless… if you’re in the market for a stellar device you can now get a few wicked one’s over at Virgin. They actually feel like a different company as they offer higher end devices now. Since they are wholly owned by Bell you will be hopping on their HSPA+ network. Here’s a complete list of their new lineup:

Good lineup and takes them away from the sub-brand category a bit. What do you think… you likey?