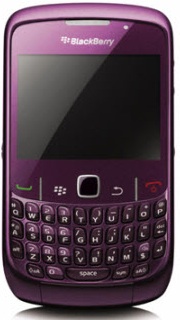 If you thought the year was over for Bell… think again! They will be launching the BlackBerry Curve 8530 on December 26th.

This is being released on their CDMA network and the run down of this Curve is that it has the new trackpad, a 3.2-inch display with a resolution of 320 X 480, 256 MB of Internal Memory and can hold up to 32GB with a microSD card. This also has dedicated media keys on the top of the device for easy access to your music, Wi-Fi enabled, BlackBerry Maps, Built-in GPS, Speakerphone, IM, Bluetooth, 2.0 megapixel camera with 5X digital zoom and video capabilities, runs on OS v5.0 with a total weight of 105 grams. Overall dimensions are 109 x 60 x 13.9 mm.

Bell will be launching this in Black and also an exclusive colour called “Royal Purple”. We’ll have more soon, specifically price plans… nothing like a good BlackBerry Boxing Day launch!