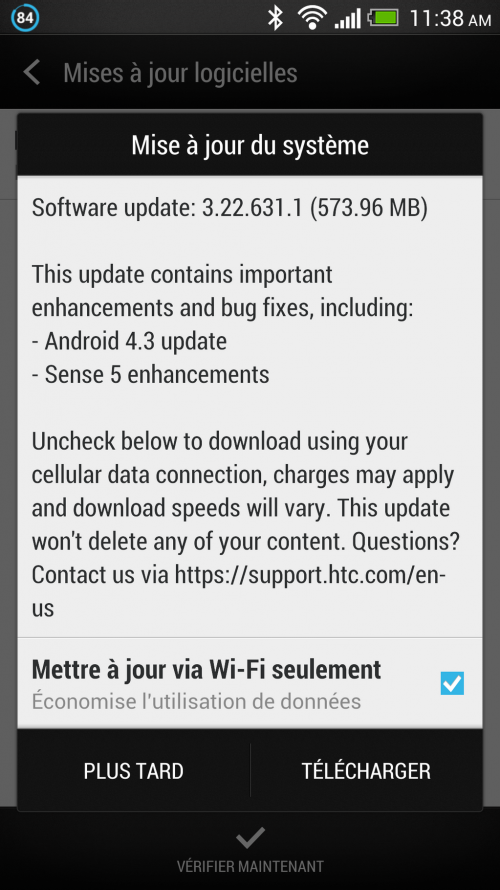 HTC One owners are in for a treat today, as the device is receiving Android 4.3 directly from its shipping version of 4.1.2.

Rogers, Bell, TELUS, and Virgin Mobile users are getting notifications of the new software, jumping to build 3.22.631.1 with a 573.96MB file. On top of the low-level improvements that come with Android 4.3, including lockscreen widgets, quick settings in the notification bar, Bluetooth 4.0 LE support, OpenGL 3.0 ES support and more, HTC has endowed the One with significant camera improvements and the overall OS with a speed boost. There’s also new content for BlinkFeed and some improvements to the Sense 5 launcher.

We’ve been playing with Android 4.3 for a while on the HTC One and have found it significantly more stable and zippier through menus, apps and games. One significant addition, too, is the ability to map the home button long-press as a menu button, doing away with the reviled virtual menu button. Also included are new camera themes for those awesome 30-second clips. Expect improved battery life, too, with an auto-brightness algorithm that errs on the more conservative side.

If you haven’t received your update notification yet, head to Settings/About/Software Update and keep checking. It’s a big one, and the first non-Nexus update to Android 4.3 to hit Canadians, so let us know how you fare.