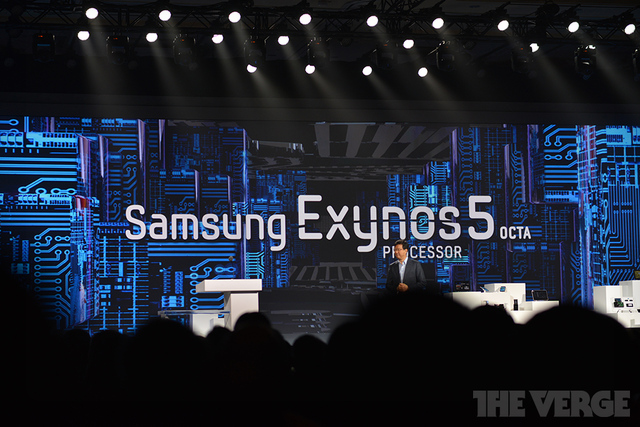 During Samsung’s second CES keynote, the company announced an eight-core system-on-chip called the Exynos 5 Octa. The chip will be based on ARM big.LITTLE architecture, which incorporates four ARM Cortex-A15 chips and four low-power Cortex-A7’s. This allows for dynamic scaling based on the workload; less intensive tasks will use the A7’s, while gaming and HD video decoding will use the A15’s. The team also scaled the manufacturing from 32nm to 28nm, significantly improving thermal efficiency in the process.

The chip was designed for both smartphones and tablets, and will lean toward the high-end devices for both. These devices will be able to take advantage of the Exynos 5’s ability to multitask, as high and low priority tasks will be shunted to the appropriate sub-chip. Samsung boasts that it provides double the 3D performance of any other mobile processor; that should be good news to anyone who uses his device for gaming and video.

While there’s no word on when we can expect to see this chip in a Canadian shipping phone or tablet, it at least gives us something to look forward to. Now that Nvidia, Qualcomm and Samsung have all announced the next wave of mobile processors, 2013 is bound to be an interesting year for computing.