Springpad takes on Evernote as it expands to Android tablets 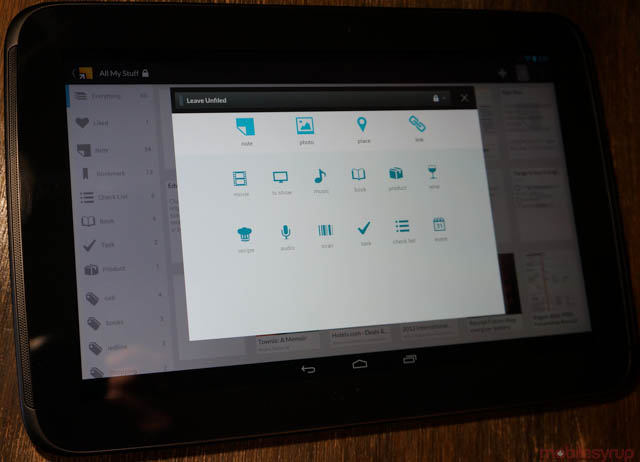 Springpad has always lived in the shadow of Evernote’s better-funded ecosystem, but the note-taking app has slowly re-branded itself as a steroid-infused digital scrapbook. You can capture anything: web clips, photos, videos, lists, recipes and even scan bar codes to remember a book you want to buy. You can research movies and save them in a “To Watch” notebook; you can look up wines and record your favourites.

For a long time the app was extremely usable on Android phones — and Springpad had a great iPhone and iPad version — but lacked a native Android tablet app. Today, they’ve filled the hole in their lineup and released a beautiful, capable and extremely well-designed Android app that takes advantage of the entire widescreen ratio in landscape mode.

While the app doesn’t have the same rich text features as its Evernote counterpart, it fulfills its function as an everyman app for catalogers  There’s a lot to do and a lot to keep track of, but if you integrate it well enough into your workflow — including the optional web clipper available on Chrome or Mozilla — it stands to be extremely useful.

Thanks to the Nexus 7 and Nexus 10, Android tablet apps seem to be becoming more common, and this will only spur on more developers to adapt their smartphone wares for the big screen.