SaskTel to release the HTC One V for $270 outright 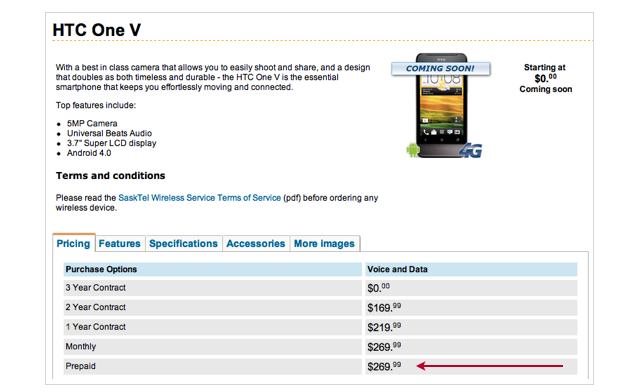 The HTC One V will was released yesterday by Bell and will probably hit other carriers next week. SaskTel has posted the Ice Cream Sandwich Android device on their site, still “coming soon,” but has posted up their price plans. Similar to Bell’s with it being available for free on a 3-year and tops out at wickedly affordable $269.99 outright – this is $30 less than Bell is selling it for. This is the entry-level unibody designed Android that also has Beats Audio and Sense 4.0, 5MP camera that shoots 720p HD videos, 3.7-inch Super LCD display (480 x 800), 1 GHz processor, weighs 120 grams and comes with 25GB of Dropbox storage.